The lethality of Mycobacterium tuberculosis remains the highest among infectious organisms and is linked to inadequate immune response of the host. Containment and cure of tuberculosis requires an effective cell-mediated immune response, and the absence, during active tuberculosis infection, of delayed-type hypersensitivity (DTH) responses to mycobacterial antigens, defined as anergy, is associated with poor clinical outcome. To investigate the biochemical events associated with this anergy, we screened 206 patients with pulmonary tuberculosis and identified anergic patients by their lack of dermal reactivity to tuberculin purified protein derivative (PPD). In vitro stimulation of T cells with PPD induced production of IL-10, IFN-γ, and proliferation in PPD+ patients, whereas cells from anergic patients produced IL-10 but not IFN-γ and failed to proliferate in response to this treatment. Moreover, in anergic patients IL-10–producing T cells were constitutively present, and T-cell receptor–mediated (TCR-mediated) stimulation resulted in defective phosphorylation of TCRζ and defective activation of ZAP-70 and MAPK. These results show that T-cell anergy can be induced by antigen in vivo in the intact human host and provide new insights into mechanisms by which M. tuberculosis escapes immune surveillance. 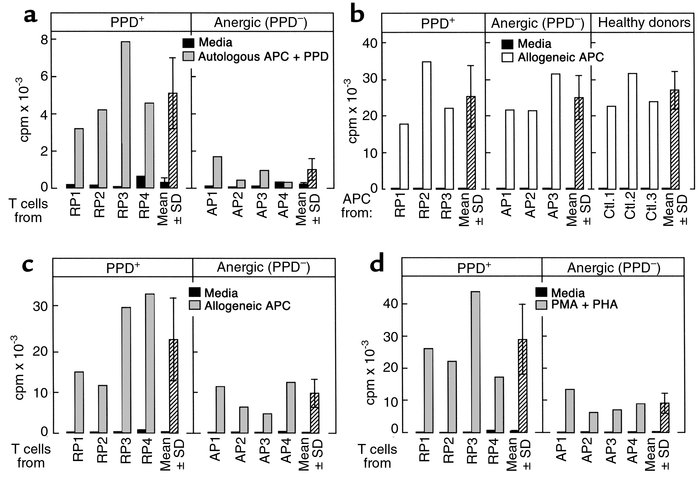