Obesity in humans and in rodents is usually associated with high circulating leptin levels and leptin resistance. To examine the molecular basis for leptin resistance, we determined the ability of leptin to induce hypothalamic STAT3 (signal transducer and activator of transcription) signaling in C57BL/6J mice fed either low-fat or high-fat diets. In mice fed the low-fat diet, leptin activated STAT3 signaling when administered via the intraperitoneal (ip) or the intracerebroventricular (icv) route, with the half-maximal dose being 30-fold less when given by the icv route. The high-fat diet increased body-weight gain and plasma leptin levels. After 4 weeks on the diet, hypothalamic STAT3 signaling after ip leptin administration was equivalent in both diet groups. In contrast, peripherally administered leptin was completely unable to activate hypothalamic STAT3 signaling, as measured by gel shift assay after 15 weeks of high-fat diet. Despite the absence of detectable signaling after peripheral leptin at 15 weeks, the mice fed the high-fat diet retained the capacity to respond to icv leptin, although the magnitude of STAT3 activation was substantially reduced. These results suggest that leptin resistance induced by a high-fat diet evolves during the course of the diet and has at least two independent causes: an apparent defect in access to sites of action in the hypothalamus that markedly limits the ability of peripheral leptin to activate hypothalamic STAT signaling, and an intracellular signaling defect in leptin-responsive hypothalamic neurons that lies upstream of STAT3 activation. 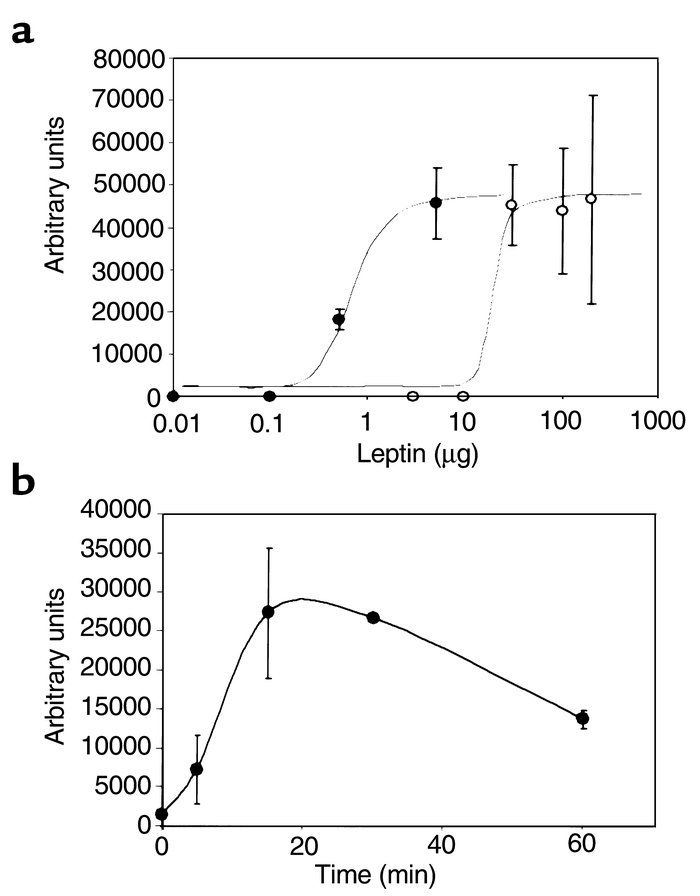