The underlying molecular mechanisms of age-related hearing loss (ARHL) in humans and many strains of mice have not been fully characterized. This common age-related disorder is assumed to be closely associated with oxidative stress. Here, we demonstrate that mTORC1 signaling is highly and specifically activated in the cochlear neurosensory epithelium (NSE) in aging mice, and rapamycin injection prevents ARHL. To further examine the specific role of mTORC1 signaling in ARHL, we generated murine models with NSE-specific deletions of Raptor or Tsc1, regulators of mTORC1 signaling. Raptor-cKO mice developed hearing loss considerably more slowly than WT littermates. Conversely, Tsc1 loss led to the early-onset death of cochlear hair cells and consequently accelerated hearing loss. Tsc1-cKO cochleae showed features of oxidative stress and impaired antioxidant defenses. Treatment with rapamycin and the antioxidant N-acetylcysteine rescued Tsc1-cKO hair cells from injury in vivo. In addition, we identified the peroxisome as the initial signaling organelle involved in the regulation of mTORC1 signaling in cochlear hair cells. In summary, our findings identify overactive mTORC1 signaling as one of the critical causes of ARHL and suggest that reduction of mTORC1 activity in cochlear hair cells may be a potential strategy to prevent ARHL.

More hair cells survived and more presynaptic ribbons were retained in mice than in WT mice. 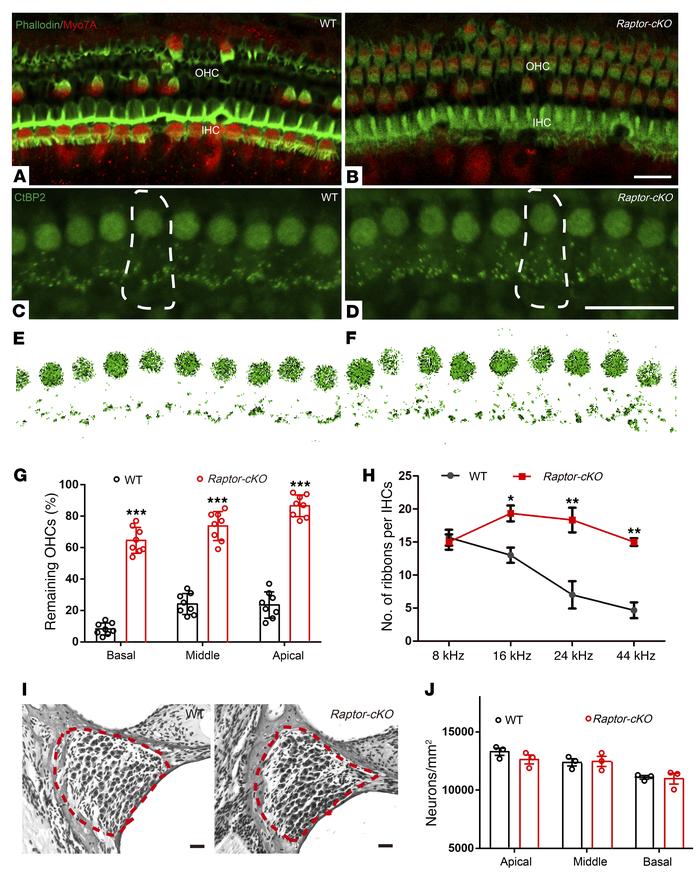 ( and ) Confocal images of surface views of the organs of Corti from the 8-kHz region stained with Myo7A (which labels inner and outer hair cells, red) and phalloidin (which labels filamentous actin, green) in 17-month-old cochleae from WT and mice. = 4. (–) Ribbons are stained with antibodies to CtBP2 (green) in 17-month-old cochleae from WT ( = 6) and mice ( = 7). A single IHC is outlined with dotted lines. () Hair cell counts from 17-month-old animals of both genotypes revealed that more hair cells survived in all 3 turns of the cochlea from mice ( = 8) compared with controls ( = 8). () More ribbon synapses remained in the mice ( = 8) than in the WT mice ( = 6) when measured at 17 months old. ( and ) Representative images and graphs illustrating the average numbers of SGNs in the cochleae of WT and mice. Similar ganglion cell survival patterns were observed in 17-month-old and WT middle turn sections by H&E staining. SGNs are surrounded by a dashed red line. SGN densities were counted and quantified in the cochleae of WT and mice; = 3. Data represent the mean ± SEM. * < 0.05, ** < 0.01, *** < 0.001, by 1-way ANOVA with Holm-Šidák multiple-comparisons test. Scale bars: 20 μm.