Recruitment of macrophages to sites of cell death is critical for induction of an immunologic response. Calcium concentrations in extracellular fluids vary markedly, and are particularly high at sites of injury or infection. We hypothesized that extracellular calcium participates in modulating the immune response, perhaps acting via the seven-transmembrane calcium-sensing receptor (CaR) on mature monocytes/macrophages. We observed a dose-dependent increase in monocyte chemotaxis in response to extracellular calcium or the selective allosteric CaR activator NPS R-467. In contrast, monocytes derived from mice deficient in CaR lacked the normal chemotactic response to a calcium gradient. Notably, CaR activation of monocytes bearing the receptor synergistically augmented the transmigration response of monocytes to the chemokine MCP-1 in association with increased cell-surface expression of its cognate receptor, CCR2. Conversely, stimulation of monocytes with MCP-1 or SDF-1α reciprocally increased CaR expression, suggesting a dual-enhancing interaction of Ca2+ with chemokines in recruiting inflammatory cells. Subcutaneous administration in mice of Ca2+, MCP-1, or (more potently) the combination of Ca2+ and MCP-1, elicited an inflammatory infiltrate consisting of monocytes/macrophages. Thus extracellular calcium functions as an ionic chemokinetic agent capable of modulating the innate immune response in vivo and in vitro by direct and indirect actions on monocytic cells. Calcium deposition may be both consequence and cause of chronic inflammatory changes at sites of injury, infection, and atherosclerosis. 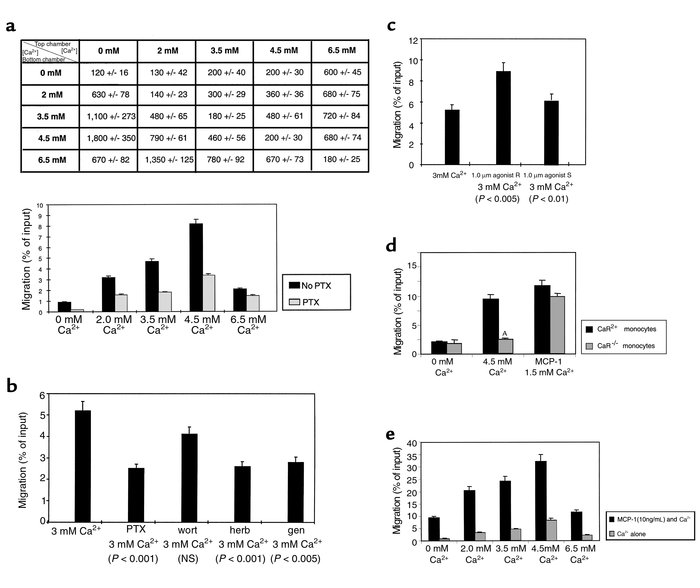 Monocytes migrate toward Ca2+ in a dose-dependent manner that is inhibitable by pretreatment with pertussis toxin, genistein, or herbimycin, and is potentiated by the selective CaR activator NPS R-467 and the chemokine MCP-1. () Transmigration assays were used to determine if Ca2+ was capable of inducing monocyte chemotaxis within a checkerboard analysis (upper panel). An input of 104 monocytes was used, and the mean numbers of cells migrating in response to each Ca2+ gradient are shown for three independent experiments. A dose-dependent effect was seen, with maximal chemotaxis observed at 4.5 mM Ca2+, which was inhibitable by pretreatment with pertussis toxin (PTX) (lower panel). () Chemotaxis of monocytes toward a positive gradient of Ca2+ at 3 mM was also inhibitable by pretreatment with the tyrosine kinase inhibitors genistein (gen) or herbimycin (herb), but not by the PI-3 kinase inhibitor wortmannin (wort). () The role of the CaR in mediating the chemotactic response to elevated Ca2+ was supported by the greater potency of R-467 (agonist R) than of S-467 (agonist S) in stimulating chemotaxis. It should be noted that no specific antagonists or neutralizing antibodies for the CaR have been defined to date. values represent comparison with 3-mM Ca2+ control using the Student’s test. () Chemotaxis of PBMC obtained from mice and mice also evaluated in response to 4.5 mM Ca2+ and to MCP-1 in the presence of 1.5 mM Ca2+. The percent migration of monocytes (black bars) and monocytes (gray bars) are shown. The data from two separate experiments are shown (mean ± SEM). A = 0.0481, Student’s test. () Chemotaxis of CD14+ monocytes toward a positive concentration gradient of MCP-1 was also dependent upon and potentiated by Ca2+. Migration of monocytes in the presence of varying levels of Ca2+ with MCP-1 (black bars) or without MCP-1 (gray bars) is shown. The percentage of cells migrating in response to MCP-1 could be augmented by increased Ca2+ concentrations with peak added activity at 4.5 mM Ca2+. Data represent mean ± SEM of at least three independent experiments.