Chromatin modification influences gene expression by either repressing or activating genes, depending on the specific histone mark. Chromatin structure can also influence alternative splicing of transcripts; however, the mechanisms by which epigenetic marks influence splicing are poorly understood. A report in the current issue of the JCI highlights the biological importance of the coordinated control of alternative pre-mRNA splicing by chromatin structure and transcriptional elongation. Yuan et al. found that mutation of the histone methyl transferase SEDT2 affects alternative splicing fates of several key regulatory genes, including those involved in Wnt signaling. As a consequence, loss of SEDT2 in the intestine aggravated Wnt/β-catenin signaling effects, thereby leading to colorectal cancer.

Model for the role of SEDT2 in CRC. 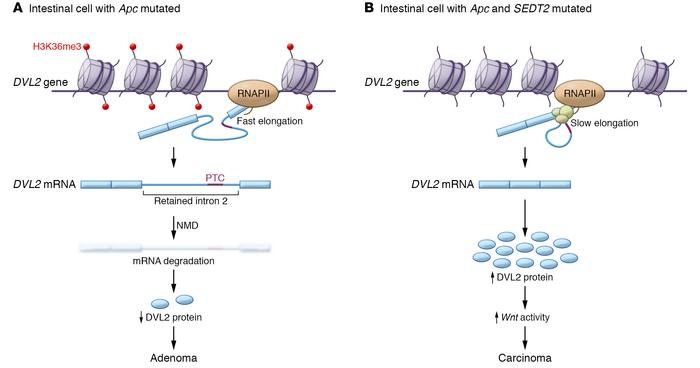 Cells in which only the gene is mutated () develop adenoma, but have normal levels of H3K36 trimethylation. In the case of the gene, normal H3K36me3 levels cause retention of intron 2 in the mature mRNA, promoting degradation of this transcript by NMD as the result of the presence of a premature termination codon (PTC) in intron 2. Subsequent mutation of the gene () globally decreases H3K36 trimethylation and reduces intron 2 retention in the mRNA. Higher levels of DVL2 protein aggravate Wnt/β-catenin–dependent carcinoma progression.