The cystic fibrosis transmembrane conductance regulator (CFTR) is an ATP-gated Cl– channel that regulates other epithelial transport proteins by uncharacterized mechanisms. We employed a yeast two-hybrid screen using the COOH-terminal 70 residues of CFTR to identify proteins that might be involved in such interactions. The α1 (catalytic) subunit of AMP-activated protein kinase (AMPK) was identified as a dominant and novel interacting protein. The interaction is mediated by residues 1420–1457 in CFTR and by the COOH-terminal regulatory domain of α1-AMPK. Mutations of two protein trafficking motifs within the 38–amino acid region in CFTR each disrupted the interaction. GST-fusion protein pull-down assays in vitro and in transfected cells confirmed the CFTR-α1-AMPK interaction and also identified α2-AMPK as an interactor with CFTR. AMPK is coexpressed in CFTR-expressing cell lines and shares an apical distribution with CFTR in rat nasal epithelium. AMPK phosphorylated full-length CFTR in vitro, and AMPK coexpression with CFTR in Xenopus oocytes inhibited cAMP-activated CFTR whole-cell Cl– conductance by approximately 35–50%. Because AMPK is a metabolic sensor in cells and responds to changes in cellular ATP, regulation of CFTR by AMPK may be important in inhibiting CFTR under conditions of metabolic stress, thereby linking transepithelial transport to cell metabolic state. 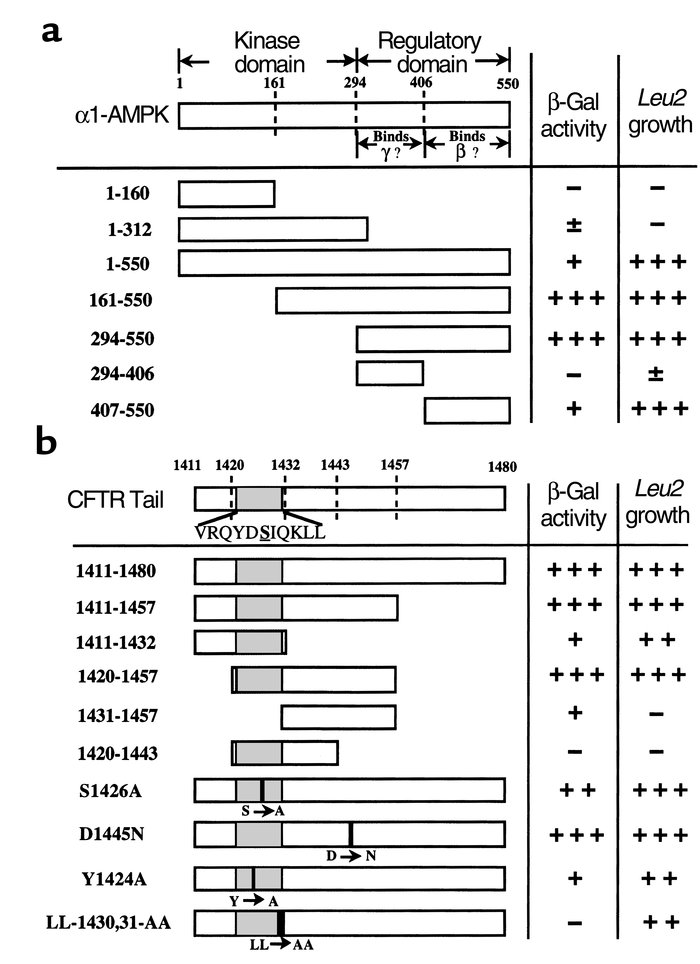 Yeast two-hybrid interaction maps of α1-AMPK and CFTR COOH-terminal tail. () Determination of regions of α1-AMPK important for interaction with CFTR-1411–1480. Functional regions of α1-AMPK are shown schematically at the top, as estimated by sequence homology to yeast Snf1p (). Constructs containing residues upstream of amino acid 161 were made by high-fidelity PCR amplification using appropriate primers and full-length rat α1-AMPK cDNA () as template. Other constructs were either original prey clones identified in the two-hybrid screen (α1-161-550 and 294-550) or were generated by PCR using α1-294-550 prey plasmid as a template. () Determination of region and specific residues within CFTR-1411–1480 important for interaction with α1-294-550. Expression of the CFTR-1420–1443 fragment could not be detected by Western analysis. Because lack of interaction observed may have resulted from no expression, it is uncertain whether residues 1444–1457 are required for strong interaction.