Induction of TLR2 activation depends on its association with the adapter protein MyD88. We have found that TLR2 and MyD88 levels are elevated in the hippocampus and cortex of patients with Alzheimer’s disease (AD) and in a 5XFAD mouse model of AD. Since there is no specific inhibitor of TLR2, to target induced TLR2 from a therapeutic angle, we engineered a peptide corresponding to the TLR2-interacting domain of MyD88 (TIDM) that binds to the BB loop of only TLR2, and not other TLRs. Interestingly, WT TIDM peptide inhibited microglial activation induced by fibrillar Aβ1-42 and lipoteichoic acid, but not 1-methyl-4-phenylpyridinium, dsRNA, bacterial lipopolysaccharide, flagellin, or CpG DNA. After intranasal administration, WT TIDM peptide reached the hippocampus, reduced hippocampal glial activation, lowered Aβ burden, attenuated neuronal apoptosis, and improved memory and learning in 5XFAD mice. However, WT TIDM peptide was not effective in 5XFAD mice lacking TLR2. In addition to its effects in 5XFAD mice, WT TIDM peptide also suppressed the disease process in mice with experimental allergic encephalomyelitis and collagen-induced arthritis. Therefore, selective targeting of the activated status of 1 component of the innate immune system by WT TIDM peptide may be beneficial in AD as well as other disorders in which TLR2/MyD88 signaling plays a role in disease pathogenesis.

Monitoring TLR2, TLR4, and MyD88 levels in the CNS of individuals clinically diagnosed with NCI, MCI, or AD. 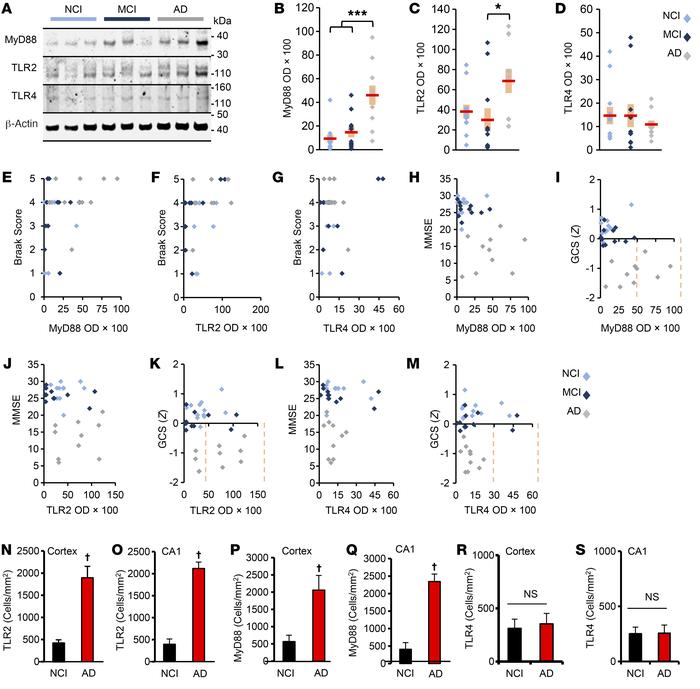