The clinical spectrum of congenital anomalies of the kidney and urinary tract (CAKUT) encompasses a common birth defect in humans that has significant impact on long-term patient survival. Overall, data indicate that approximately 20% of patients may have a genetic disorder that is usually not detected based on standard clinical evaluation, implicating many different mutational mechanisms and pathogenic pathways. In particular, 10% to 15% of CAKUT patients harbor an unsuspected genomic disorder that increases risk of neurocognitive impairment and whose early recognition can impact clinical care. The emergence of high-throughput genomic technologies is expected to provide insight into the common and rare genetic determinants of diseases and offer opportunities for early diagnosis with genetic testing. 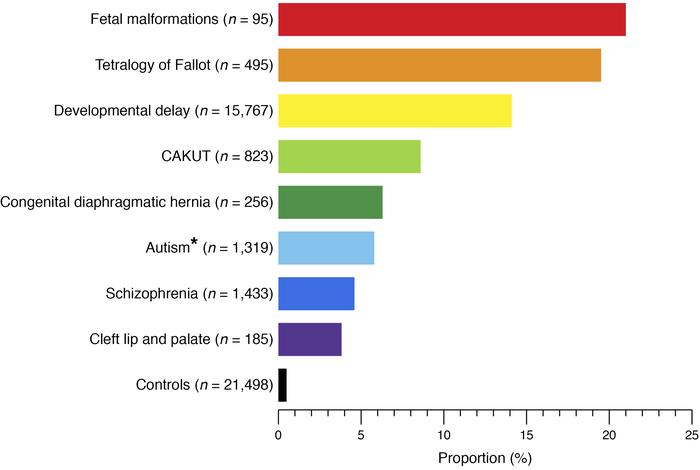 There is a striking enrichment of known genomic disorders in human developmental disease compared with controls (–, –, –). The prevalence in controls is based on 21,498 controls generated from previously published studies (, ). *The proportion of known genomic disorders in autism spectrum disorder is displayed as the weighted average of two independent studies (, ). CAKUT, congenital anomalies of the kidney and urinary tract.