Mutations in the adenomatous polyposis coli (APC) tumor suppressor gene occur in most colorectal cancers and lead to activation of β-catenin. Whereas several downstream targets of β-catenin have been identified (c-myc, cyclin D1, PPARδ), the precise functional significance of many of these targets has not been examined directly using genetic approaches. Previous studies have shown that the gene encoding the hormone gastrin is activated during colon cancer progression and the less-processed forms of gastrin are important colonic trophic factors. We show here that the gastrin gene is a downstream target of the β-catenin/TCF-4 signaling pathway and that cotransfection of a constitutively active β-catenin expression construct causes a threefold increase in gastrin promoter activity. APCmin–/+ mice overexpressing one of the alternatively processed forms of gastrin, glycine-extended gastrin, show a significant increase in polyp number. Gastrin-deficient APCmin–/+ mice, conversely, showed a marked decrease in polyp number and a significantly decreased polyp proliferation rate. Activation of gastrin by β-catenin may therefore represent an early event in colorectal tumorigenesis and may contribute significantly toward neoplastic progression. The identification of gastrin as a functionally relevant downstream target of the β-catenin signaling pathway provides a new target for therapeutic modalities in the treatment of colorectal cancer. 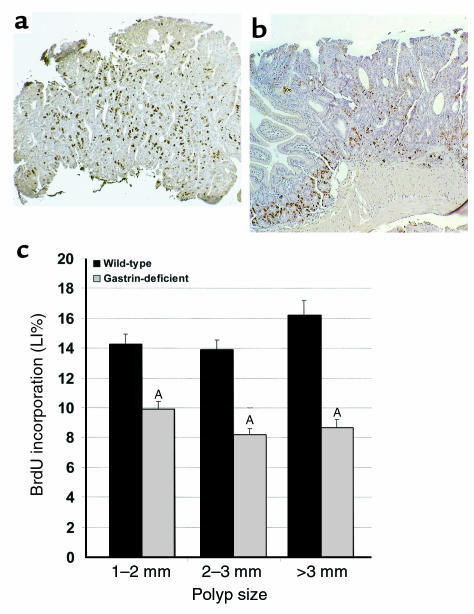 Effect of gastrin deficiency on polyp proliferation rates. () BrdU staining in 6-month old gastrin-deficient APCmin–/+ mice and () control APCmin–/+ mice. () Labeling indices were calculated by counting the number of immunopositive-staining cells as a percentage of the total number of cells in each polyp (A < 0.05) from both wild-type (filled bars) and gastrin-deficient mice (shaded bars).