A review of current theories and treatments for phantom limb pain

A review of current theories and treatments for phantom limb pain

Following amputation, most amputees still report feeling the missing limb and often describe these feelings as excruciatingly painful. Phantom limb sensations (PLS) are useful while controlling a prosthesis; however, phantom limb pain (PLP) is a debilitating condition that drastically hinders quality of life. Although such experiences have been reported since the early 16th century, the etiology remains unknown. Debate continues regarding the roles of the central and peripheral nervous systems. Currently, the most posited mechanistic theories rely on neuronal network reorganization; however, greater consideration should be given to the role of the dorsal root ganglion within the peripheral nervous system. This Review provides an overview of the proposed mechanistic theories as well as an overview of various treatments for PLP.

Cortical contributions to PLS and PLP. 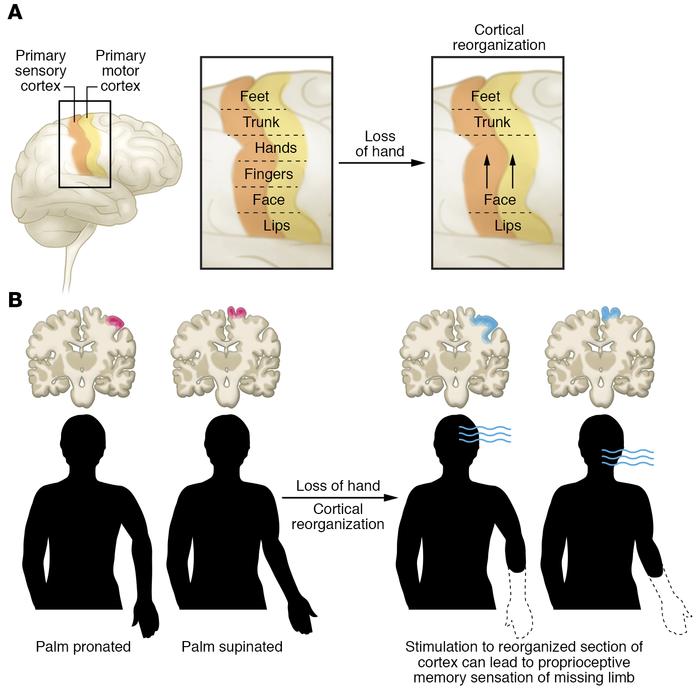 () Body part sensory and motor representation are laid out in a pattern that forms the cortical homunculus and receives sensory information (e.g., tactile, olfactory, or pain) from different areas of the body (). Following amputation, a cortical region that received sensory or motor projections from the amputated limb may begin to receive sensory or motor input, respectively, from neighboring cortical regions, which expand to take over the region that previously controlled the amputated limb (, ). () Proprioceptive memory, which stores information about the position of the limb in space relative to the body, may influence cortical reorganization in the CNS. These memories may store information about the final position of the missing limb or, in combination with cortical reorganization, may affect PLS or PLP. This image illustrates rapid changes in cortical activation patterns that can occur simply with repositioning of the phantom limb, manifested as changes in the location of hand sensations mapped onto the face.