Transplantation of neural progenitor cells (NPCs) is a potential therapy for treating neurodegenerative disorders, but this approach has faced many challenges and limited success, primarily because of inhospitable host brain environments that interfere with enriched neuron engraftment and function. Astrocytes play neurotrophic roles in the developing and adult brain, making them potential candidates for helping with modification of hostile brain environments. In this study, we examined whether astrocytic function could be utilized to overcome the current limitations of cell-based therapies in a murine model of Parkinson’s disease (PD) that is characterized by dopamine (DA) neuron degeneration in the midbrain. We show here that cografting astrocytes, especially those derived from the midbrain, remarkably enhanced NPC-based cell therapeutic outcomes along with robust DA neuron engraftment in PD rats for at least 6 months after transplantation. We further show that engineering of donor astrocytes with Nurr1 and Foxa2, transcription factors that were recently reported to polarize harmful immunogenic glia into the neuroprotective form, further promoted the neurotrophic actions of grafted astrocytes in the cell therapeutic approach. Collectively, these findings suggest that cografting astrocytes could be a potential strategy for successful cell therapeutic outcomes in neurodegenerative disorders.

DA neuron differentiation and maturation promoted by coculturing with astrocytes. 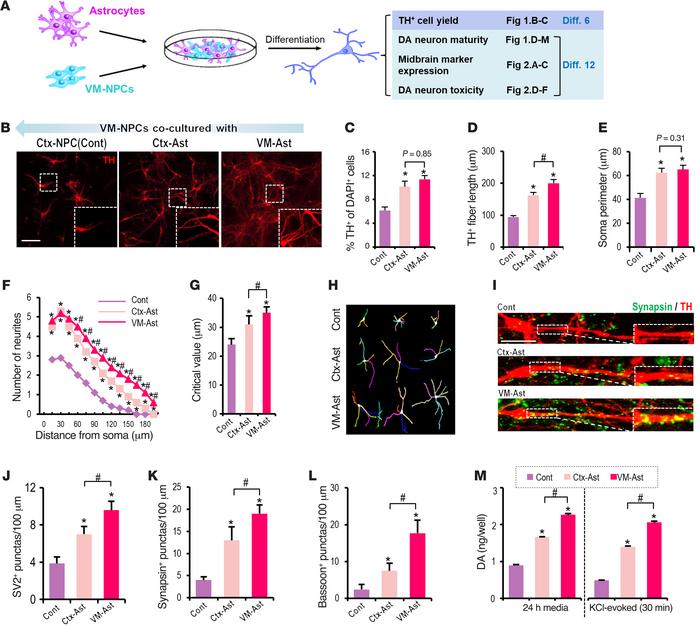 () Schematic for the coculture experiments. () Representative images of TH+ DA neurons differentiated from VM-NPCs in the presence of Ctx-NPCs (control), Ctx-Ast, or VM-Ast. Scale bar: 100 μm. Insets, enlarged images of the boxed areas (original magnification, ×400). () DA neuronal yields at differentiation day 6 (D6). (–) Morphometric measurement of DA neuron maturity assessed by neurite outgrowth lengths (), soma size (), and by the Sholl test ( and ). In the Sholl analysis, the total number of neurite crossings was counted in each circle with the radius increasing in steps of 15 μm (). The critical value () is the radius at which there was a maximum number of neurite crossings. * < 0.05, significantly different from the control; # < 0.05, significantly different from Ctx-Ast, 1-way ANOVA. = 3–5 wells () and 100 ( and ) and 25–30 ( and ) TH+ cells in each group.() Representative TH+ neuronal morphologies reconstructed in 3D by Neurolucida. (–) Synaptic densities on TH+ fibers. () Representative confocal images of synapsin+TH+ fibers. Scale bar: 25 μm. Puncta positive for the synaptic vesicle–specific markers SV2 (), synapsin (), and bassoon () on TH+ fibers were counted. * < 0.05, significantly different from the control; # < 0.05, significantly different from Ctx-Ast. = 20 TH+ fibers for each group. () Presynaptic DA release. = 3 independent cultures. DA levels were measured in the media conditioned in the differentiated cultures for 24 hours (D13–D15) and in cultures evoked by KCl-mediated depolarization for 30 minutes. * < 0.05; # < 0.05, 1-way ANOVA.