Pituitary adenylate cyclase–activating polypeptide (PACAP) is a ubiquitous neuropeptide of the vasoactive intestinal peptide (VIP) family that potentiates glucose-stimulated insulin secretion. Pancreatic β cells express two PACAP receptor subtypes, a PACAP-preferring (PAC1) and a VIP-shared (VPAC2) receptor. We have applied a gene targeting approach to create a mouse lacking the PAC1 receptor (PAC1–/–). These mice were viable and normoglycemic, but exhibited a slight feeding hyperinsulinemia. In vitro, in the isolated perfused pancreas, the insulin secretory response to PACAP was reduced by 50% in PAC1–/– mice, whereas the response to VIP was unaffected. In vivo, the insulinotropic action of PACAP was also acutely reduced, and the peptide induced impairment of glucose tolerance after an intravenous glucose injection. This demonstrates that PAC1 receptor is involved in the insulinotropic action of the peptide. Moreover, PAC1–/– mice exhibited reduced glucose-stimulated insulin secretion in vitro and in vivo, showing that the PAC1 receptor is required to maintain normal insulin secretory responsiveness to glucose. The defective insulinotropic action of glucose was associated with marked glucose intolerance after both intravenous and gastric glucose administration. Thus, these results are consistent with a physiological role for the PAC1 receptor in glucose homeostasis, notably during food intake. 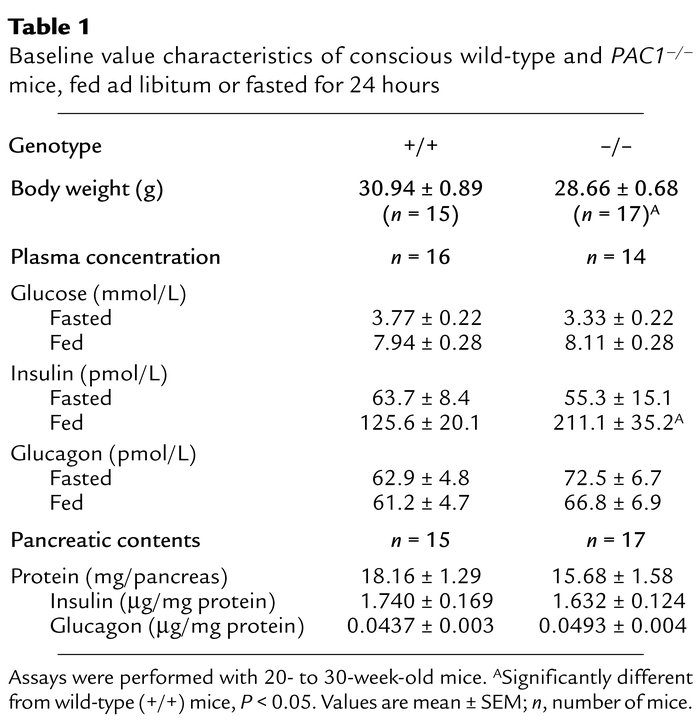