The balancing act of the liver: tissue regeneration versus fibrosis

The balancing act of the liver: tissue regeneration versus fibrosis

Epithelial cell loss alters a tissue’s optimal function and awakens evolutionarily adapted healing mechanisms to reestablish homeostasis. Although adult mammalian organs have a limited regeneration potential, the liver stands out as one remarkable exception. Following injury, the liver mounts a dynamic multicellular response wherein stromal cells are activated in situ and/or recruited from the bloodstream, the extracellular matrix (ECM) is remodeled, and epithelial cells expand to replenish their lost numbers. Chronic damage makes this response persistent instead of transient, tipping the system into an abnormal steady state known as fibrosis, in which ECM accumulates excessively and tissue function degenerates. Here we explore the cellular and molecular switches that balance hepatic regeneration and fibrosis, with a focus on uncovering avenues of disease modeling and therapeutic intervention.

Coping with injury: regeneration versus repair. 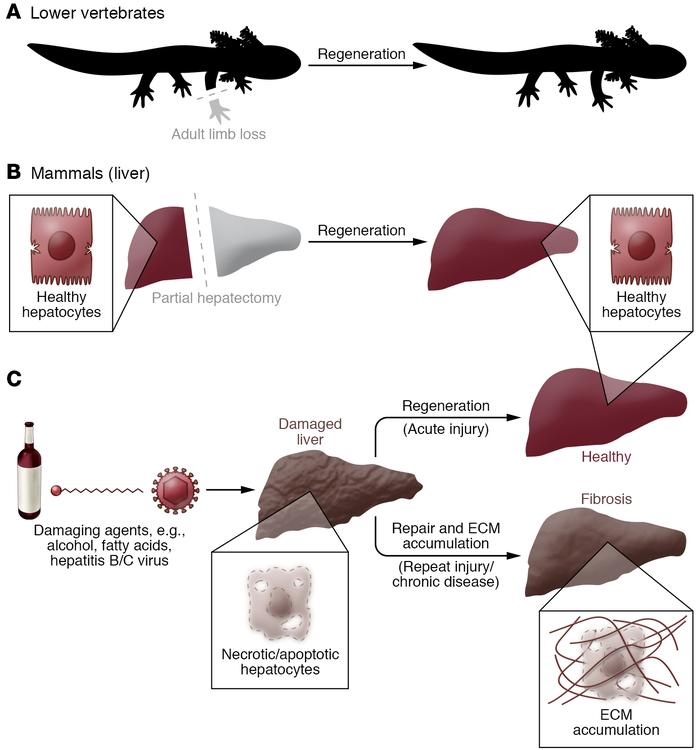 () Lower vertebrates, such as axolotls, salamanders, and fish, are able to regenerate severed limbs through a process that reconstitutes original tissue anatomy and function without leaving a scar (a meshwork of ECM). Mammals may similarly regenerate complex tissues during embryogenesis, but lose most of this capacity in adulthood. () The liver is one of the few adult mammalian organs that retains a remarkable ability to regenerate itself. Resection of up to 70% of the liver mass via partial hepatectomy leads to compensatory growth from the intact tissue and fully restores organ size in a matter of days, similarly to axolotl limb regrowth. However, the hepatectomized liver is typically not injured or “damaged,” and regeneration is a result of the organ’s ability to sense insufficient size. () The liver may also regenerate following injury by exogenous and/or endogenous agents (e.g., alcohol, hepatitis B/C viruses, fatty acids) that cause hepatocyte death. This process is characterized by an inflammatory reaction and ECM synthesis/remodeling. However, if the damaging insult persists, the tissue will be repaired instead of regenerated, resulting in excessive scarring, known as fibrosis, that alters histoarchitecture and hinders optimal tissue function.