Helicobacter pylori resists gastric acidity by modulating the proton-gated urea channel UreI, allowing for pHout-dependent regulation of urea access to intrabacterial urease. We employed pH- and Ca2+-sensitive fluorescent dyes and confocal microscopy to determine the location, rate, and magnitude of pH changes in an H. pylori-AGS cell coculture model, comparing wild-type bacteria with nonpolar ureI-deletion strains (ureI-ve). Addition of urea at pH 5.5 to the coculture resulted first in elevation of bacterial periplasmic pH, followed by an increase of medium pH and then pH in AGS cells. No change in periplasmic pH occurred in ureI-deletion mutants, which also induced a slower increase in the pH of the medium. Pretreatment of the mutant bacteria with the detergent C12E8 before adding urea resulted in rapid elevation of bacterial cytoplasmic pH and medium pH. UreI-dependent NH3 generation by intrabacterial urease buffers the bacterial periplasm, enabling acid resistance at the low urea concentrations found in gastric juice. Perfusion of AGS cells with urea-containing medium from coculture at pH 5.5 did not elevate pHin or [Ca2+]in, unless the conditioned medium was first neutralized to elevate the NH3/NH4+ ratio. Therefore, cellular effects of intrabacterial ammonia generation under acidic conditions are indirect and not through a type IV secretory complex. The pHin and [Ca2+]in elevation that causes the NH3/NH4+ ratio to increase after neutralization of infected gastric juice may contribute to the gastritis seen with H. pylori infection. 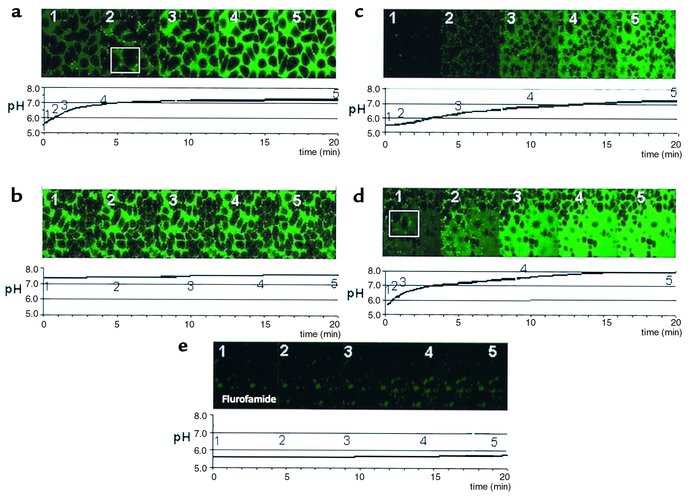 Bacterial and medium pH effects of urea addition to -AGS coculture with either wild-type or I mutant strains. ( and ) The effect of urea addition on medium and bacterial pH in coculture with expressing UreI. and AGS cells in coculture were perfused with medium containing BCECF-free acid at the indicated pH and then 5 mM urea was added. A calibrated pH microelectrode was placed in the chamber to monitor medium pH and confocal microscopy was used to monitor the regions of change of pH after the addition of 5 mM urea using wild-type or Ideletion mutants as detailed in Methods. The numbering in the confocal images corresponds in time to the images above the pH tracings. () At a medium pH of 5.5, there was a rapid rise of medium pH after the addition of 5 mM urea. Within 2 minutes, the pH had risen to 6.0 and reached a steady-state pH of about 7.0 within 5 minutes. In the image sequence above the pH curve from the same experiment, the fluorescence increased markedly first on or at the bacteria, evident in the first two or three images. The increase in fluorescence then spread into the medium as medium pH increased and is close to maximum at about 4 minutes (see Table ). () In contrast, when urea is added at 5 mM at a medium pH of 7.4, there was little change of medium pH or the pH around the organism. After 20 minutes, the pH had only increased by 0.2 U. ( and ) The effect of 5 mM urea addition on medium and bacterial pH in coculture with I–negative mutants. () When urea was added at pH 5.5 to the Ive strain, there was a slow rise of medium pH, reaching about 6.5 after 5 minutes and then rising slowly to 7.2 at the end of the experiments. There was no obvious change of fluorescence with the addition of urea in the vicinity of the organisms, although they have considerable surface urease activity (). () Urea addition in the presence of 0.01% C12E8 to the Ideletion mutant resulted in a rapid change in medium pH, faster than that seen with the wild-type organisms, reaching pH 7.1 within 5 minutes and continuing to increase to more than 8.0, in contrast to the untreated wild-type organisms. In the fluorescence images, there was a similar increase in the fluorescence of the medium reflecting the pH changes monitored with the pH electrode. () When 5 mM urea was added in the presence of 10 μM flurofamide at pH 5.5, no change in either bacterial or medium pH could be observed, showing the dependence of these changes on urease activity.