By integrating an agonist satiety signal, provided by alpha–melanocyte-stimulating hormone (α-MSH), and an antagonist signal, provided by agouti-related protein (AGRP), the melanocortin-4 receptor (MC4-R) is a key element in the hypothalamic control of food intake. Inactivation of the gene encoding this G protein–coupled receptor causes obesity in mice. In humans, frameshift mutations in MC4-R cause an early-onset dominant form of obesity in two families. In this study we find a high frequency (4%) of rare heterozygous MC4-R mutations in a large population of morbidly obese patients. No such mutations were found in controls. By analyzing the phenotypes of the probands carrying these mutations, we demonstrate that these patients display a common, nonsyndromic form of obesity. Interestingly, functional analysis of the mutant receptors indicates that obesity-associated defects in MC4-R range from loss of function to constitutive activation. Transmission of these mutations in the families of the carriers indicates a variable expressivity that is not related to the functional severity of the mutations. This variable expressivity of MC4-R–associated obesity is not due to variations in genes for α-MSH or AGRP. Taken together, these results demonstrate that MC4-R mutations are a frequent but heterogeneous genetic cause of morbid obesity. 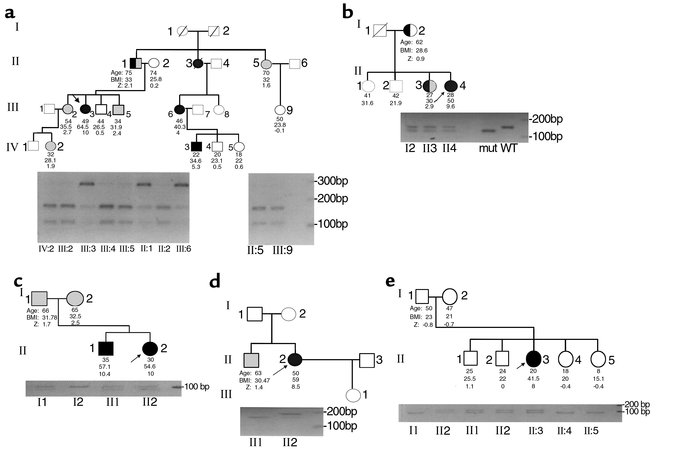 Pedigrees, mutation screening, and phenotypes in the available family members of MC4-R mutation carriers. For each mutation, the upper part of the figure represents the pedigree structure of the family of the carrier. Age (years), BMI (kg/m2), and Z-score (standard deviation of BMI) are indicated under each individual. Arrows indicate the probands. Hatched symbols denote obesity (30 ≤ BMI < 40 kg/m2). Filled symbols denote early-onset morbid obesity (BMI ≥ 40). Half-filled symbols denote a history of childhood obesity (obesity before age 20). The lower portion of each part of the figure represents the result of PCR-RFLP genotyping of each available family member. Genotyping was performed using a specific assay for each mutation, as described in Methods. C+: positive control (amplified from the cloned mutation and digested); C–: negative control (amplified from the wild-type receptor and digested). () In family 1143 the Arg165Trp mutation was transmitted to the proband III:3 by her obese father II:1. He developed obesity during infancy (BMI = 31 kg/m2 at 16 years, Z-score = 4.6 SDs of BMI). During adulthood, he reached the diagnostic cut-off point for morbid obesity, since his maximal lifetime BMI was 41 kg/m2 at age 30. His lifetime weight variation was 90–125 kg. The proband’s cousin III:6, bearing the mutation, also had a morbid form of obesity of early onset (80 kg at age 10 years and 100 kg at age 16 years). Her mother, II:3, closely resembled proband III:3, but no precise phenotypic data were available. () In family 1261 the mutation Ile170Val was transmitted by the obese mother I:2, who developed obesity during puberty (at 14 years of age, BMI 28 kg/m2, Z-score = 3). Her adult lifetime weight variation was 50–90 kg. She also transmitted the mutation to her daughter II:3, who became overweight at puberty (at 14 years old, BMI = 28 kg/m2, Z-score = 3.5), and her BMI was 30.4 kg/m2 (Z-score = 3.8) at age 20. Her maximal weight was 82 kg after the age of 20. () In family 1283 all the carriers of mutation Ile301Thr were obese. The proband’s brother is a morbidly obese man (BMI 57.1, percent body fat 54%), with severe obesity developed early in infancy. His birth weight was normal (2.8 kg). He had a BMI of 22 kg/m2 (Z-score = 4.3) at 9 years old, and he was morbidly obese (BMI 47 kg/m2, Z-score = 13) at 14 years. His adult lifetime weight variation was between 117 and 185 kg. His obesity is complicated by glucose intolerance and hypertriglyceridemia. The mutation was transmitted to this sibling pair by the father I:1, who had a less-severe form of obesity of later onset (after the age of 20 years). () In family 1413, no clinical nor genotype data were available for the parents of the proband II:2 carrying the constitutively active Leu250Gln mutation. Her brother II:1 is not carrying the mutation. () In family 1417 the 47-48insG frameshift mutation was transmitted to the proband II:3 by her nonobese mother I:2 (BMI = 21 kg/m2). She never had weight problems either during infancy or during puberty, and her maximal reached BMI was 22 kg/m2. She moderately controls her body weight, with declared diet restriction below one per year, and is not a sportswoman. She also transmitted the mutation to her two older sons, II:1 and II:2. Both are nonobese young males, 25 and 24 years old, with a BMI of 25.5 and 22 kg/m2, respectively.