The WD40-containing E3 ubiquitin ligase RFWD3 has been recently linked to the repair of DNA damage by homologous recombination (HR). Here we have shown that an RFWD3 mutation within the WD40 domain is connected to the genetic disease Fanconi anemia (FA). An individual presented with congenital abnormalities characteristic of FA. Cells from the patient carrying the compound heterozygous mutations c.205_206dupCC and c.1916T>A in RFWD3 showed increased sensitivity to DNA interstrand cross-linking agents in terms of increased chromosomal breakage, reduced survival, and cell cycle arrest in G2 phase. The cellular phenotype was mirrored in genetically engineered human and avian cells by inactivation of RFWD3 or introduction of the patient-derived missense mutation, and the phenotype was rescued by expression of wild-type RFWD3 protein. HR was disrupted in RFWD3-mutant cells as a result of impaired relocation of mutant RFWD3 to chromatin and defective physical interaction with replication protein A. Rfwd3 knockout mice appear to have increased embryonic lethality, are subfertile, show ovarian and testicular atrophy, and have a reduced lifespan resembling that of other FA mouse models. Although RFWD3 mutations have thus far been detected in a single child with FA, we propose RFWD3 as an FA gene, FANCW, supported by cellular paradigm systems and an animal model.

Identification and characterization of mutation. 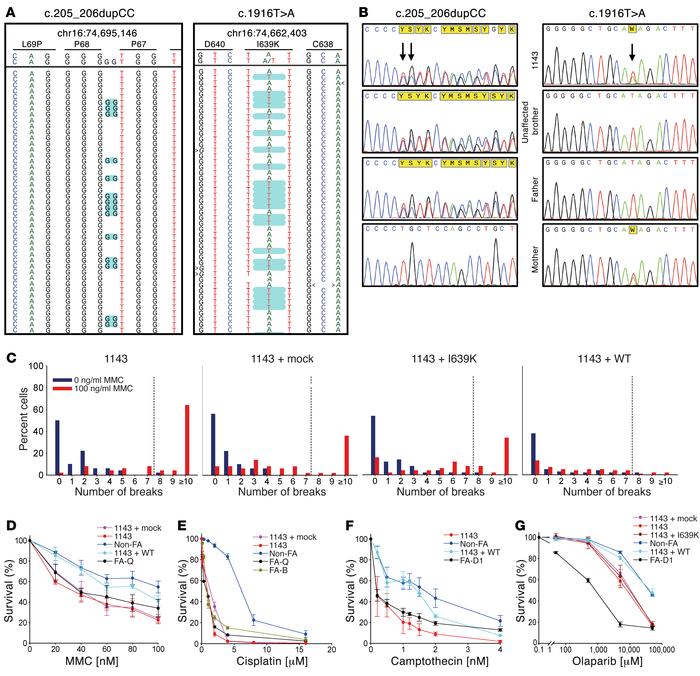 () WES data reveal 2 heterozygous sequence variants in the gene, highlighted in green. The gene is located on the minus strand; chromosomal and amino acid positions next to the mutations are depicted atop the sequence data. () Sanger sequencing confirms both mutations in individual 1143 and familial segregation. () Histograms reflecting proportions of cells with the indicated number of chromosomal breaks per metaphase, blue without, red after exposure to mitomycin C (MMC). Dashed lines delimit high rates (>7) of RFWD3-mutated (1143) and unproductively transduced fibroblasts (1143+mock, 1143+I630K). Rates of 1143+WT are rescued. Fifty metaphases each were scored. The 1143 plot is reused in . (–) Dose-response curves of the same cell lines used in compared with non-FA and FA control (FA-Q, FA-B, or FA-D1) fibroblasts after exposure to the indicated agents and concentrations. The data represent mean ± SEM; = 5. The 1143 and non-FA curves of are reused in . The 1143 and non-FA curves of are reused in .