Mutations in the human NBEAL2 gene cause gray platelet syndrome (GPS), a bleeding diathesis characterized by a lack of α granules in platelets. The functions of the NBEAL2 protein have not been explored outside platelet biology, but there are reports of increased frequency of infection and abnormal neutrophil morphology in patients with GPS. We therefore investigated the role of NBEAL2 in immunity by analyzing the phenotype of Nbeal2-deficient mice. We found profound abnormalities in the Nbeal2-deficient immune system, particularly in the function of neutrophils and NK cells. Phenotyping of Nbeal2-deficient neutrophils showed a severe reduction in granule contents across all granule subsets. Despite this, Nbeal2-deficient neutrophils had an enhanced phagocyte respiratory burst relative to Nbeal2-expressing neutrophils. This respiratory burst was associated with increased expression of cytosolic components of the NADPH oxidase complex. Nbeal2-deficient NK cells were also dysfunctional and showed reduced degranulation. These abnormalities were associated with increased susceptibility to both bacterial (Staphylococcus aureus) and viral (murine CMV) infection in vivo. These results define an essential role for NBEAL2 in mammalian immunity. 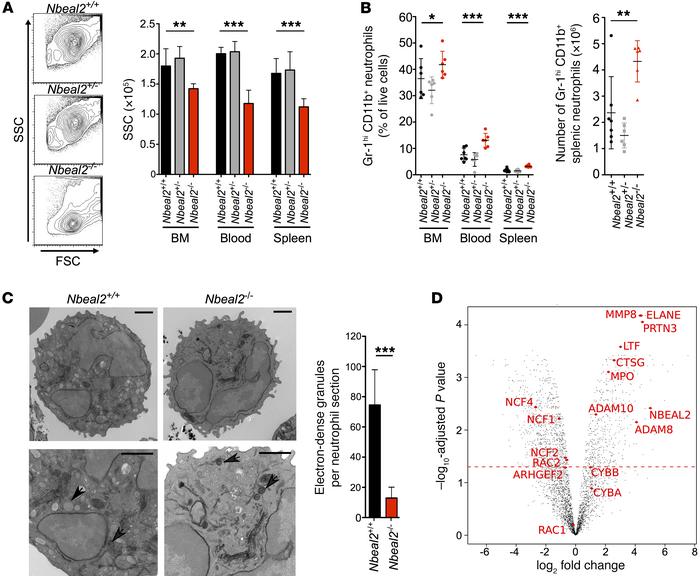 () Flow plots of BM neutrophils showing forward scatter (FSC) and side scatter (SSC), together with the geometric mean of SSC in Gr-1hiCD11b+ neutrophils from BM, blood, and spleen ( = 6–7). () Proportion of neutrophils in the BM, blood, and spleen and absolute numbers of splenic neutrophils ( = 6–7). () Transmission electron micrographs of BM neutrophils from whole BM sections. Representative images of neutrophils (top) (original magnification, ×3,500) and a section from the image (bottom) (original magnification, ×6,500). Scale bars: 500 nm (all images). Electron-dense granules (arrowheads) were counted by an investigator blinded to genotype for the WT cells ( = 13) and –/– cells ( = 23) across 3 biological replicates. () Volcano plot shows the 3,485 proteins identified in the BM neutrophil proteome of and –/– mice. The axis shows FDR-corrected values, the axis displays the fold change (log2) of protein expression compared with –/– expression, and the horizontal line shows the cutoff at = 0.05. Granule components, NADPH oxidase subunits, and are indicated in red. Error bars indicate the mean and SD. Data are representative of 2 independent experiments ( and ) or a pooled analysis from 3 independent MS runs (). * < 0.05, ** < 0.01, and *** < 0.001, by Kruskal-Wallis ( and ) and Mann-Whitney () tests.