Simian immunodeficiency virus (SIV) infection of rhesus monkeys provides an excellent model of the central nervous system (CNS) consequences of HIV infection. To discern the relationship between viral load and abnormalities induced in the CNS by the virus, we infected animals with SIV and later instituted antiviral treatment to lower peripheral viral load. Measurement of sensory-evoked potentials, assessing CNS neuronal circuitry, revealed delayed latencies after infection that could be reversed by lowering viral load. Cessation of treatment led to the reappearance of these abnormalities. In contrast, the decline in general motor activity induced by SIV infection was unaffected by antiviral treatment. An acute increase in the level of the chemokine monocyte chemoattractant protein-1 (MCP-1) was found in the cerebrospinal fluid (CSF) relative to plasma in the infected animals at the peak of acute viremia, likely contributing to an early influx of immune cells into the CNS. Examination of the brains of the infected animals after return of the electrophysiological abnormalities revealed diverse viral and inflammatory findings. Although some of the physiological abnormalities resulting from SIV infection can be at least temporarily reversed by lowering viral load, the viral-host interactions initiated by infection may result in long-lasting changes in CNS-mediated functions. 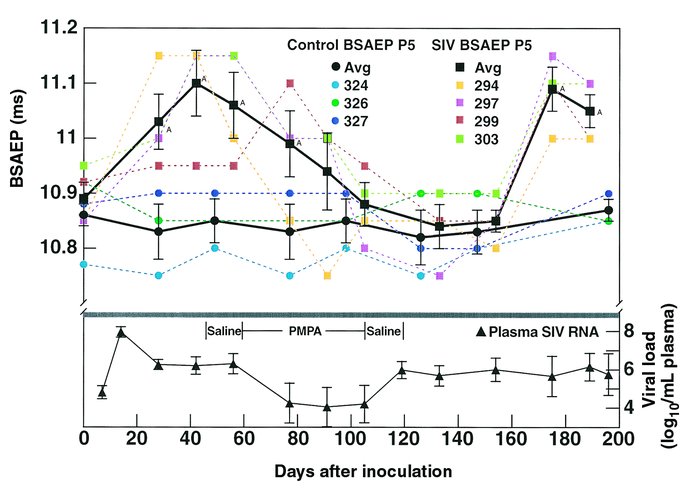