Endothelial cell progenitors, angioblasts, have been detected in the peripheral blood of adult humans, mice, and rabbits. These cells have been shown to incorporate into the endothelium of newly forming blood vessels in pathological and nonpathological conditions. Here we investigated the possibility that the CD34-expressing leukocytes (CD34+ cells) that appear to be enriched for angioblasts could be used to accelerate the rate of blood-flow restoration in nondiabetic and diabetic mice undergoing neovascularization due to hindlimb ischemia. CD34+ cells did not accelerate the restoration of flow in nondiabetic mice, but dramatically increased it in diabetic mice. Furthermore, CD34+ cells derived from type 1 diabetics produced fewer differentiated endothelial cells in culture than did their type 2 diabetic– or nondiabetic-derived counterparts. In vitro experiments suggest that hyperglycemia per se does not alter the ability of angioblasts to differentiate or of angioblast-derived endothelial cells to proliferate. In contrast, hyperinsulinemia may enhance angioblast differentiation but impair angioblast-derived endothelial cell survival or proliferation. Our findings suggest that CD34+ cells may be a useful tool for therapeutic angiogenesis in diabetics. 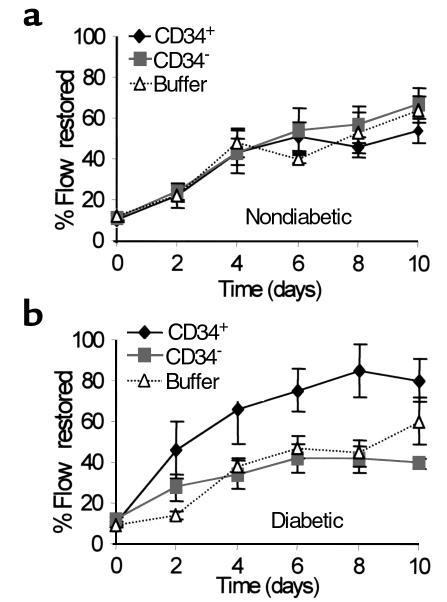 Restoration of blood flow to surgically induced ischemic limbs. The data are expressed as the percentage of blood flow in the operated limb relative to the contralateral unoperated limb on the same day. Data were normalized to correct for preoperative differences in the two legs. The mean fluxes were determined using laser Doppler imaging for 7–10 mice in each group and were averaged. Error bars represent standard errors. () Nondiabetic mice. () Diabetic mice (serum glucose > 220 mg/dL). CD34+, injected with CD34+ cells; CD34–, injected with CD34– cells; buffer, injected with vehicle or not injected.