We examined the effect of glatiramer acetate, a random copolymer of alanine, lysine, glutamic acid, and tyrosine, on antigen-specific T-cell responses in patients with multiple sclerosis (MS). Glatiramer acetate (Copaxone) functioned as a universal antigen, inducing proliferation, independent of any prior exposure to the polymer, in T-cell lines prepared from MS or healthy subjects. However, for most patients, daily injections of glatiramer acetate abolished this T-cell response and promoted the secretion of IL-5 and IL-13, which are characteristic of Th2 cells. The surviving glatiramer acetate–reactive T cells exhibited a greater degree of degeneracy as measured by cross-reactive responses to combinatorial peptide libraries. Thus, it appears that, in some individuals, in vivo administration of glatiramer acetate induces highly cross-reactive T cells that secrete Th2 cytokines. To our knowledge, glatiramer acetate is the first agent that suppresses human autoimmune disease and alters immune function by engaging the T-cell receptor. This compound may be useful in a variety of autoimmune disorders in which immune deviation to a Th2 type of response is desirable. 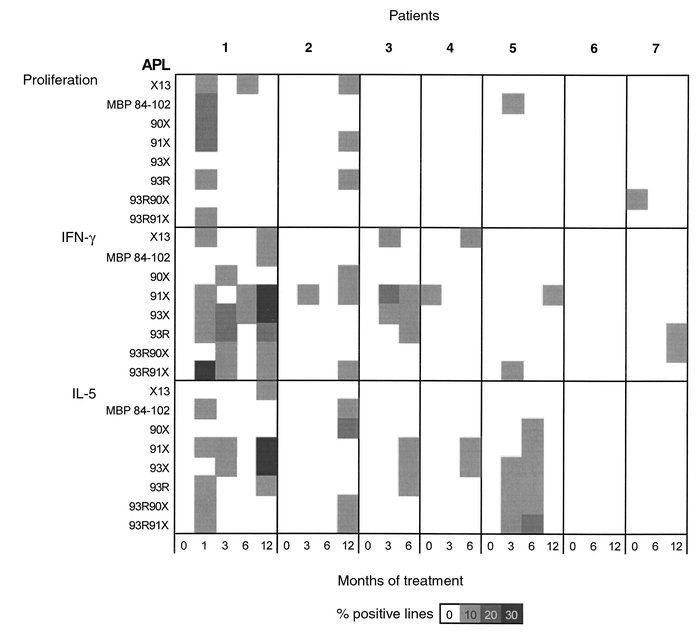 Cross-reactivity of GA-reactive T-cell lines is increased after daily injections of GA. Percentages of the GA-induced T-cell lines cross-reacting to each APL tested at each time point are shown for the 7 patients encoded by gray scale. Proliferative IFN-γ and IL-5 responses were examined for all T-cell lines and are represented separately in the top, middle, and lower third. A minimum SI of 2 and a difference of 2 SD over the background was required for classification as a cross-reactive T-cell line.