RASA1 regulates the function of lymphatic vessel valves in mice

RASA1 regulates the function of lymphatic vessel valves in mice

Capillary malformation–arteriovenous malformation (CM-AVM) is a blood and lymphatic vessel (LV) disorder that is caused by inherited inactivating mutations of the RASA1 gene, which encodes p120 RasGAP (RASA1), a negative regulator of the Ras small GTP-binding protein. How RASA1 mutations lead to the LV leakage defects that occur in CM-AVM is not understood. Here, we report that disruption of the Rasa1 gene in adult mice resulted in loss of LV endothelial cells (LECs) specifically from the leaflets of intraluminal valves in collecting LVs. As a result, valves were unable to prevent fluid backflow and the vessels were ineffective pumps. Furthermore, disruption of Rasa1 in midgestation resulted in LEC apoptosis in developing LV valves and consequently failed LV valvulogenesis. Similar phenotypes were observed in induced RASA1-deficient adult mice and embryos expressing a catalytically inactive RASA1R780Q mutation. Thus, RASA1 catalytic activity is essential for the function and development of LV valves. These data provide a partial explanation for LV leakage defects and potentially other LV abnormalities observed in CM-AVM. 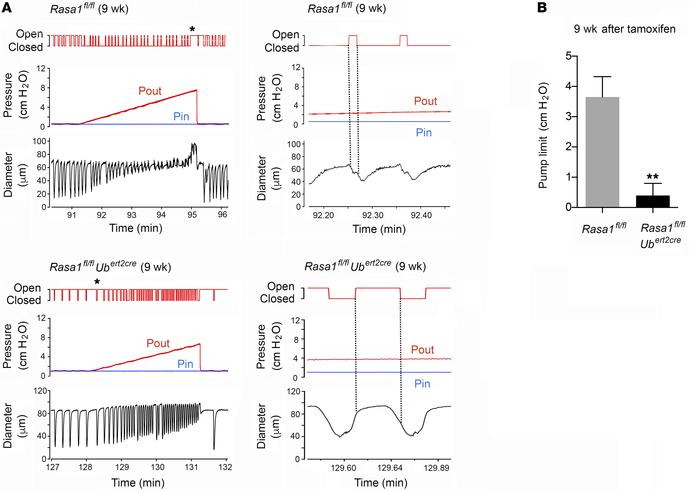 () Examples of traces from pump function assays performed with LVs from littermate and mice treated with tamoxifen 9 weeks beforehand. Tests were performed as indicated for contraction assays in except that Pin was kept at 0.5 cm H2O as Pout was increased from 0.5 to 10 cm H2O in ramp-wise fashion. The position of the downstream valve as open or closed is shown at top. In traces at left, asterisks indicate the point of pump failure where the downstream valve locks, at least temporarily, into an open position. Traces at right show magnified regions from left traces near the beginning of the Pout ramps. Drop-down dotted lines are to illustrate at which point in the vessel contraction cycle valves open. Note valve opening during systole in the vessel and during diastole in the vessel. () Shown is the mean pump limit plus SEM for vessels from littermate ( = 4) and mice ( = 5) in pump-function tests. The pump limit is defined as the adverse pressure (Pout− Pin) at pump failure. ** < 0.0025, Student’s 2-sample test.