Enteroaggregative Escherichia coli (EAEC) is an emerging cause of acute and persistent diarrhea worldwide. EAEC infections are associated with intestinal inflammation and growth impairment in infected children, even in the absence of diarrhea. We previously reported that prototype EAEC strains rapidly induce IL-8 production by Caco-2 intestinal epithelial cells, and that this effect is mediated by a soluble, heat-stable factor released by these bacteria in culture. We herein report the cloning, sequencing, and expression of this biologically active IL-8–releasing factor from EAEC, and its identification as a flagellin that is unique among known expressed proteins. Flagella purified from EAEC 042 and several other EAEC isolates potently release IL-8 from Caco-2 cells; an engineered aflagellar mutant of 042 does not release IL-8. Finally, cloned EAEC flagellin expressed in nonpathogenic E. coli as a polyhistidine-tagged fusion protein maintains its proinflammatory activity. These findings demonstrate a major new means by which EAEC may cause intestinal inflammation, persistent diarrhea, and growth impairment that characterize human infection with these organisms. Furthermore, they open new approaches for diagnosis and vaccine development. This novel pathogenic mechanism of EAEC extends an emerging paradigm of bacterial flagella as inflammatory stimuli. 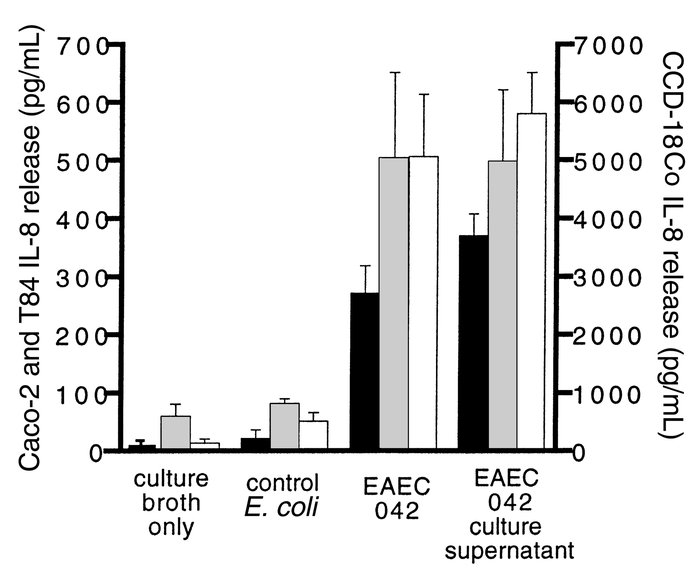