Over the last years, hypothalamic inflammation has been linked to the development and progression of obesity and its sequelae. There is accumulating evidence that this inflammation not only impairs energy balance but also contributes to obesity-associated insulin resistance. Elevated activation of key inflammatory mediators such as JNK and IκB kinase (IKK) occurs rapidly upon consumption of a high-fat diet, even prior to significant weight gain. This activation of hypothalamic inflammatory pathways results in the uncoupling of caloric intake and energy expenditure, fostering overeating and further weight gain. In addition, these inflammatory processes contribute to obesity-associated insulin resistance and deterioration of glucose metabolism via altered neurocircuit functions. An understanding of the contributions of different neuronal and non-neuronal cell types to hypothalamic inflammatory processes, and delineation of the differences and similarities between acute and chronic activation of these inflammatory pathways, will be critical for the development of novel therapeutic strategies for the treatment of obesity and metabolic syndrome.

Molecular pathways of metabolic inflammation in the hypothalamus. 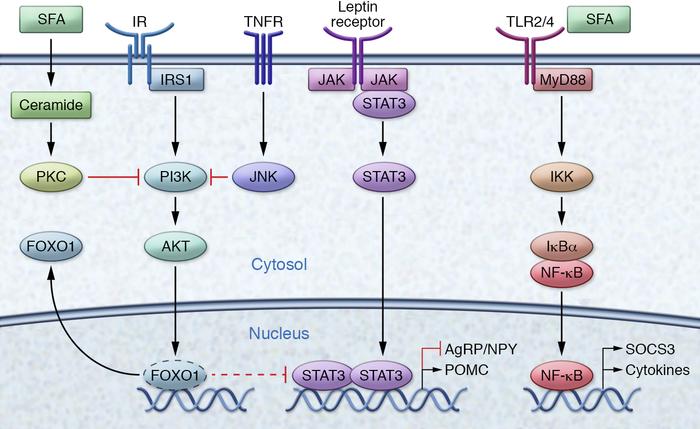 Activation of the insulin signaling pathway leads to FOXO1 phosphorylation, resulting in nuclear exclusion and inhibition of FOXO1-mediated activation/repression of target genes. By removing FOXO1 repression, insulin increases the anorexigenic tone via induced POMC gene expression in POMC neurons with simultaneous suppressed AgRP/NPY expression in AgRP neurons. Binding of leptin to the leptin receptor activates and recruits STAT3. Tyrosine phosphorylation triggers dimerization of STAT3 and translocation to the nucleus, where the STAT3 complex induces POMC gene expression in POMC neurons and suppresses AgRP/NPY in AgRP neurons. TNF-α binding promotes the trimerization of the TNF receptor, which promotes the assembly of a signaling complex that activates JNK and inhibits cellular insulin signaling. In addition, TNF signaling triggers activation of NF-κB. In the TLR4 signaling pathway, MyD88 serves as a scaffold protein for downstream signaling molecules. NF-κB dimers are sequestered in the cytoplasm by the inhibitor of NF-κB α (IκBα). Phosphorylation by the IKK complex and subsequent proteolysis of IκBα leads to the release and nuclear translocations of NF-κB. NF-κB heterodimer RelA and p50 bind to motifs in the promoter of targets genes, such as SOCS3, a common inhibitor of insulin and leptin signaling, and proinflammatory genes. Induction of ceramides leads to increased phosphorylation and localization of PKC with caveolin-enriched lipid microdomains to inactivate Akt.