Over the last years, hypothalamic inflammation has been linked to the development and progression of obesity and its sequelae. There is accumulating evidence that this inflammation not only impairs energy balance but also contributes to obesity-associated insulin resistance. Elevated activation of key inflammatory mediators such as JNK and IκB kinase (IKK) occurs rapidly upon consumption of a high-fat diet, even prior to significant weight gain. This activation of hypothalamic inflammatory pathways results in the uncoupling of caloric intake and energy expenditure, fostering overeating and further weight gain. In addition, these inflammatory processes contribute to obesity-associated insulin resistance and deterioration of glucose metabolism via altered neurocircuit functions. An understanding of the contributions of different neuronal and non-neuronal cell types to hypothalamic inflammatory processes, and delineation of the differences and similarities between acute and chronic activation of these inflammatory pathways, will be critical for the development of novel therapeutic strategies for the treatment of obesity and metabolic syndrome. 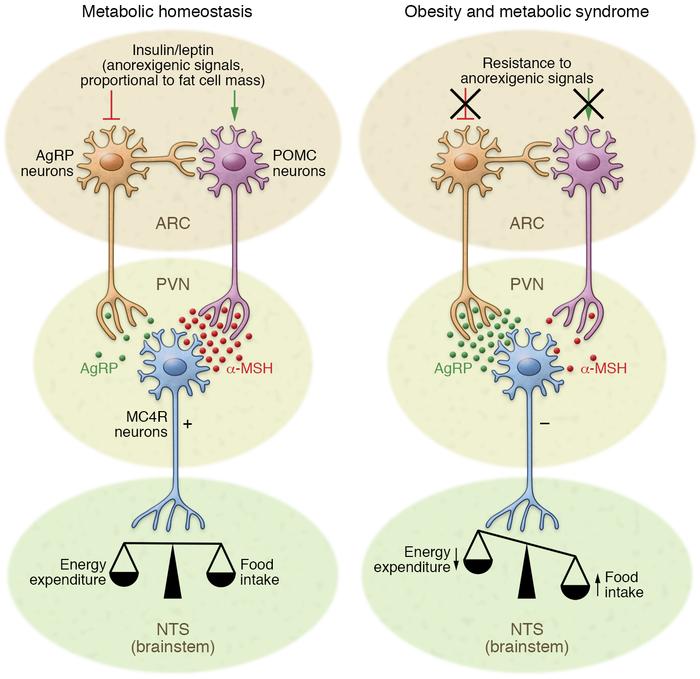 The hypothalamus senses and integrates feedback from adipostatic hormones, which circulate in levels proportionate to nutritional status and adipose tissue stores. Insulin and leptin act directly on neuronal subsets in the ARC of the hypothalamus to control energy homeostasis. Through activation of POMC neurons and inhibition of AgRP neurons, adipostatic signals activate MC4R-expressing neurons in the PVN. During fasting conditions, the expression of AgRP increases, whereas POMC expression is reduced, resulting in decreased MC4R signaling. In the fed state, AgRP levels are diminished and POMC levels increase, which triggers MC4R signaling and culminates in satiety and stimulation of energy expenditure. Neuronal inflammation and the subsequent insulin and leptin resistance of ARC neurons disrupts this metabolic feedback loop, further promoting increased food intake and body weight gain.