The regulatory roles of long noncoding RNAs (lncRNAs) in transcriptional coactivators are still largely unknown. Here, we have shown that the peroxisome proliferator–activated receptor γ (PPARγ) coactivator α (PGC-1α, encoded by ) is functionally regulated by the lncRNA taurine-upregulated gene 1 (). Further, we have described a role for in the regulation of mitochondrial function in podocytes. Using a murine model of diabetic nephropathy (DN), we performed an unbiased RNA-sequencing (RNA-seq) analysis of kidney glomeruli and identified as a differentially expressed lncRNA in the diabetic milieu. Podocyte-specific overexpression (OE) of in diabetic mice improved the biochemical and histological features associated with DN. Unexpectedly, we found that OE rescued the expression of PGC-1α and its transcriptional targets. OE was also associated with improvements in mitochondrial bioenergetics in the podocytes of diabetic mice. Mechanistically, we found that the interaction between and PGC-1α promotes the binding of PGC-1α to its own promoter. We identified a -binding element (TBE) upstream of the gene and showed that binds with the TBE to enhance promoter activity. These findings indicate that a direct interaction between PGC-1α and modulates mitochondrial bioenergetics in podocytes in the diabetic milieu.

enhances promoter activity via the TBE. 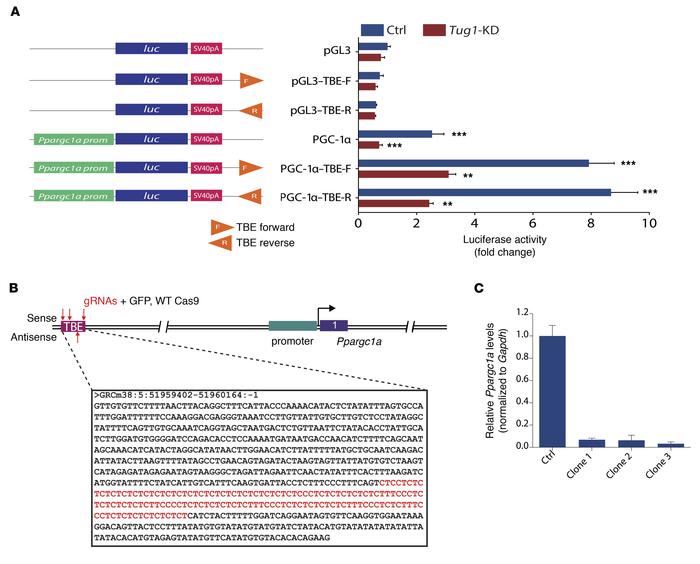 () Schematic of promoter-luciferase constructs. Right, luciferase reporter activity in control and -KD podocytes. Inclusion of the TBE leads to robust enhancement of promoter activity, which is significantly attenuated in -KD cells. ** < 0.01, and *** < 0.001, by 2-tailed Student’s test. luc, luciferase; F, forward; R, reverse. () Schematic of the genomic context of the TBE. The highlighted sequences refer to the sense strand of the TBE. The GA-repeat motif is located in the antisense strand. Genomic coordinates refer to Ensembl mouse genome assembly GRCm38. Red arrows indicate the position of the sgRNAs designed to target the TBE element. gRNAs, guide RNAs. () qPCR analysis of mRNA in control podocytes and 3 independent TBE targeted clones. Expression values normalized to internal controls. Cell culture experiments repeated at least 3 times. Data are expressed as the mean ± SEM. Ctrl, control.