Matrix metalloproteinase-9 (MMP-9) is prominently overexpressed after myocardial infarction (MI). We tested the hypothesis that mice with targeted deletion of have less left ventricular (LV) dilation after experimental MI than do sibling wild-type (WT) mice. Animals that survived ligation of the left coronary artery underwent echocardiographic studies after MI; all analyses were performed without knowledge of mouse genotype. By day 8, knockout (KO) mice had significantly smaller increases in end-diastolic and end-systolic ventricular dimensions at both midpapillary and apical levels, compared with infarcted WT mice; these differences persisted at 15 days after MI. KO mice had less collagen accumulation in the infarcted area than did WT mice, and they showed enhanced expression of MMP-2, MMP-13, and TIMP-1 and a reduced number of macrophages. We conclude that targeted deletion of the gene attenuates LV dilation after experimental MI in mice. The decrease in collagen accumulation and the enhanced expression of other MMPs suggest that MMP-9 plays a prominent role in extracellular matrix remodeling after MI. 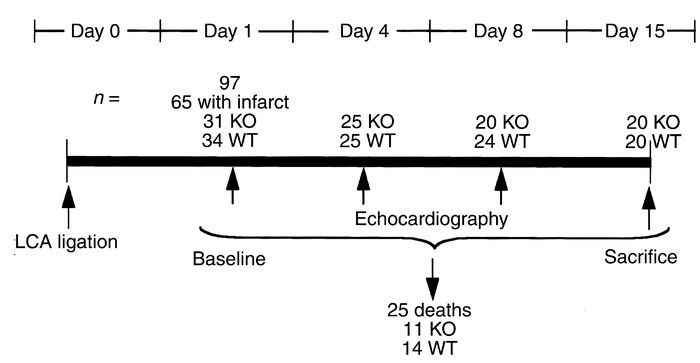