Orphan GPCRs provide an opportunity to identify potential pharmacological targets, yet their expression patterns and physiological functions remain challenging to elucidate. Here, we have used a genetically engineered knockin reporter mouse to map the expression pattern of the during development and adulthood. We observed that is expressed at the crypt base throughout the small intestine, where it is enriched in crypt base columnar stem cells, one of the most active stem cell populations in the body. knockdown had no effect on homeostatic intestinal proliferation in vivo, but led to marked increases in proliferation during intestinal regeneration following irradiation-induced injury. In the mouse model, which forms spontaneous intestinal adenomas, reductions in led to more adenomas and decreased survival. Loss of enhanced organoid growth efficiency ex vivo in an EGF-dependent manner. reduction led to increased activation of ERK1/2 in basal and challenge models, demonstrating a potential role for this orphan GPCR in regulating the proliferative capacity of the intestine. Importantly, expression was profoundly reduced in numerous human carcinomas, including colon adenocarcinoma. Together, these results implicate as a negative regulator of intestinal MAPK signaling–induced proliferation, particularly during regeneration and adenoma formation. 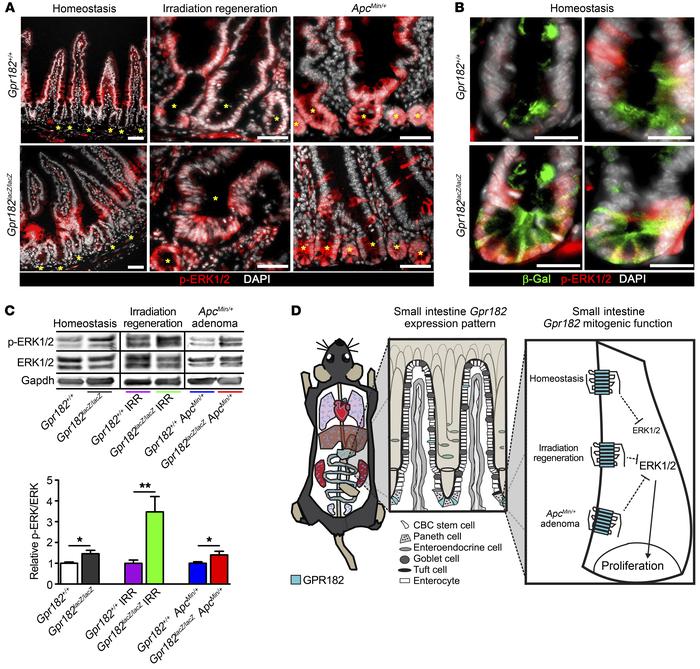 () Immunofluorescence of p-ERK1/2 (red) staining in and intestine during homeostasis, 5 days after IRR, and in animals. Yellow asterisks mark crypts. () Colocalization of β-gal+ (green) ISCs with p-ERK1/2 in compared with crypts. Scale bars: 50 μm () and 20 μm (). () Representative immunoblots and quantification of relative p-ERK1/2 expression in unchallenged, 5 days post-IRR, and polyps from whole jejunum lysates derived from and mice. Samples were normalized to total ERK1/2 and . GAPDH was used as a loading control. Biological replicates: = 5–10 mice per genotype per condition. * < 0.05 and ** < 0.01, by unpaired test. () Model summarizing GPR182 β-gal expression pattern (blue) in the whole mouse (heart, lungs, liver, stomach, small intestine, colon, kidney, and testis), with more specific expressional detail within the small intestine. GPR182 functions to inhibit ERK1/2 signaling to regulate the proliferative capacity of the intestine.