After the initial responsiveness of triple-negative breast cancers (TNBCs) to chemotherapy, they often recur as chemotherapy-resistant tumors, and this has been associated with upregulated homology-directed repair (HDR). Thus, inhibitors of HDR could be a useful adjunct to chemotherapy treatment of these cancers. We performed a high-throughput chemical screen for inhibitors of HDR from which we obtained a number of hits that disrupted microtubule dynamics. We postulated that high levels of the target molecules of our screen in tumors would correlate with poor chemotherapy response. We found that inhibition or knockdown of dynamin 2 (DNM2), known for its role in endocytic cell trafficking and microtubule dynamics, impaired HDR and improved response to chemotherapy of cells and of tumors in mice. In a retrospective analysis, levels of DNM2 at the time of treatment strongly predicted chemotherapy outcome for estrogen receptor–negative and especially for TNBC patients. We propose that DNM2-associated DNA repair enzyme trafficking is important for HDR efficiency and is a powerful predictor of sensitivity to breast cancer chemotherapy and an important target for therapy. 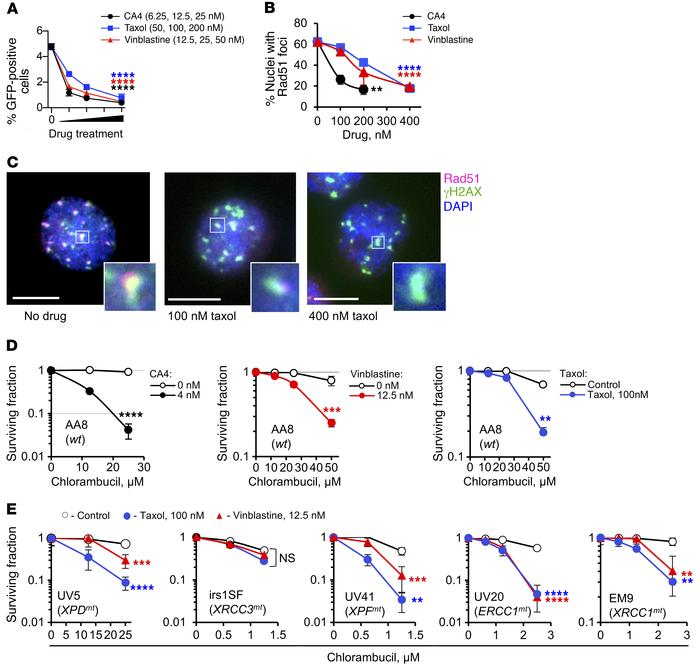 () The tubulin binders combretastatin A4 (CA4), taxol, and vinblastine inhibit gene conversion in the U2OS-DR-GFP cells. () CA4, taxol, and vinblastine inhibit formation of Rad51 foci in CHO AA8 cells at 2 hours after 3 Gy. () Colocalization of Rad51 and γH2AX foci shows that Rad51 foci are induced at DSBs and that taxol reduces Rad51 accumulation at DSBs. Scale bars: 10 μm. Insets show higher magnification of selected γH2AX foci. () CA4, taxol, and vinblastine increase the sensitivity of CHO AA8 cells to chlorambucil. () Taxol and vinblastine increase chlorambucil sensitivity of CHO mutant cells defective in nucleotide excision repair (UV5, UV20, and UV41) and base excision/single-strand break repair (EM9), but do not increase chlorambucil sensitivity of irs1SF cells defective in HDR. UV5, irs1SF, UV41, UV20, and EM9 cells have mutations in the , , , , and genes, respectively. Shown are means ± SDs from ≥ 3 experiments (, , and ) and means ± SDs from > 2 experiments (; ranges are shown for points with 2 replicates). Significance analysis: 1-way ANOVA ( and ) and 2-way ANOVA ( and ). Drug-treated samples were compared with the solvent controls. ** < 0.01, *** < 0.001, **** < 0.0001.