Rodents given a supramaximally stimulating dose of cholecystokinin or its analogue cerulein develop acute pancreatitis with acinar cell injury, pancreatic inflammation, and intrapancreatic digestive enzyme (i.e., trypsinogen) activation. Prior thermal stress is associated with heat shock protein 70 (HSP70) expression and protection against cerulein-induced pancreatitis. However, thermal stress can also induce expression of other HSPs. The current studies were performed using an in vitro system to determine whether HSP70 can actually mediate protection against pancreatitis and, if so, to define the mechanism underlying that protection. We show that in vitro exposure of freshly prepared rat pancreas fragments to a supramaximally stimulating dose of cerulein results in changes similar to those noted in cerulein-induced pancreatitis, i.e., intra-acinar cell trypsinogen activation and acinar cell injury. Short-term culture of the fragments results in HSP70 expression and loss of the pancreatitis-like changes noted after addition of cerulein. The culture-induced enhanced HSP70 expression can be prevented by addition of either the flavonoid antioxidant quercetin or an antisense oligonucleotide to HSP70. Under these latter conditions, addition of a supramaximally stimulating concentration of cerulein results in trypsinogen activation and acinar cell injury. These findings indicate that the protection against cerulein-induced pancreatitis that follows culture-induced (and possibly thermal) stress is mediated by HSP70. They suggest that the HSP acts by preventing trypsinogen activation within acinar cells. 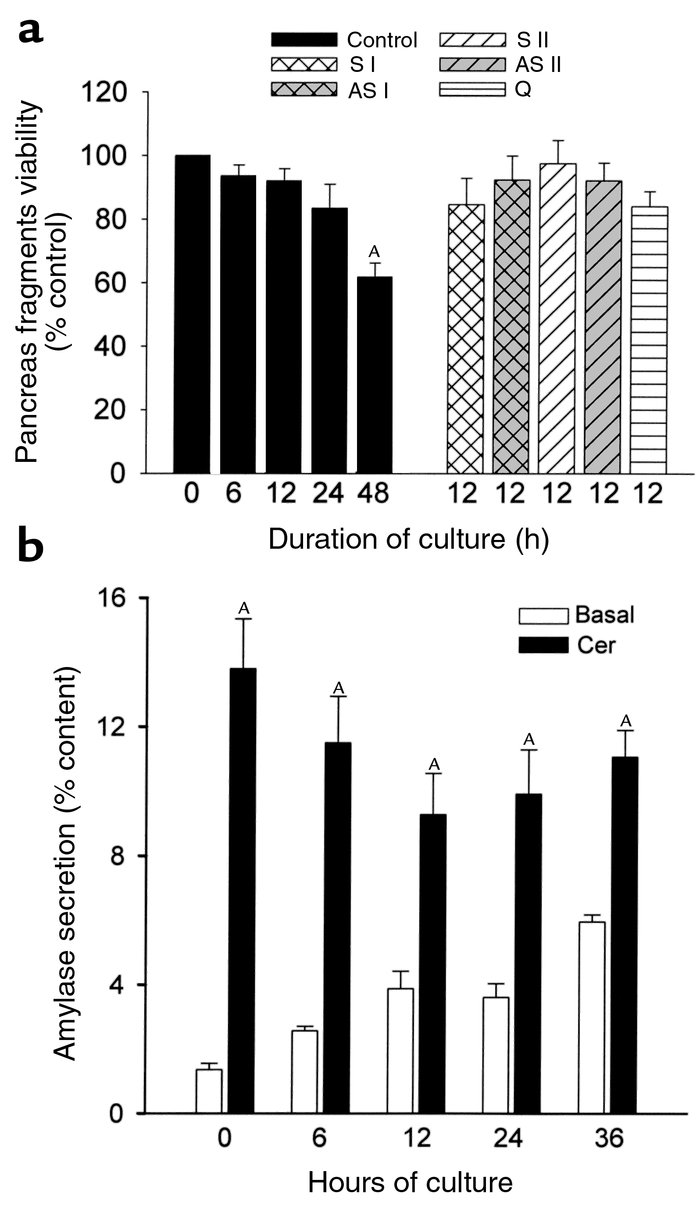 Effect of duration of culture and incubation with oligonucleotides on the viability of pancreas fragments as assessed by MTT assay and amylase secretion. () MTT assay. S I and S II represent sense oligonucleotides, AS I and AS II represent antisense nucleotides, and Q represents quercetin as described in the text. Values are mean ± SEM obtained from at least three separate experiments and expressed as percent of control (0 hours) values. A < 0.05 compared with freshly prepared (0 hours) samples. () Amylase release into the medium in response to 0.1 nM cerulein was quantitated as described in the text. Values are mean ± SEM for at least three separate experiments, each consisting of three or more wells in each group. A < 0.05 when cerulein-stimulated amylase secretion is compared with basal values at each time point indicated.