Retinitis pigmentosa (RP) encompasses a diverse group of Mendelian disorders leading to progressive degeneration of rods and then cones. For reasons that remain unclear, diseased RP photoreceptors begin to deteriorate, eventually leading to cell death and, consequently, loss of vision. Here, we have hypothesized that RP associated with mutations in phosphodiesterase-6 (PDE6) provokes a metabolic aberration in rod cells that promotes the pathological consequences of elevated cGMP and Ca2+, which are induced by the mutation. Inhibition of sirtuin 6 (SIRT6), a histone deacetylase repressor of glycolytic flux, reprogrammed rods into perpetual glycolysis, thereby driving the accumulation of biosynthetic intermediates, improving outer segment (OS) length, enhancing photoreceptor survival, and preserving vision. In mouse retinae lacking , effectors of glycolytic flux were dramatically increased, leading to upregulation of key intermediates in glycolysis, TCA cycle, and glutaminolysis. Both transgenic and AAV2/8 gene therapy–mediated ablation of in rods provided electrophysiological and anatomic rescue of both rod and cone photoreceptors in a preclinical model of RP. Due to the extensive network of downstream effectors of , this study motivates further research into the role that these pathways play in retinal degeneration. Because reprogramming metabolism by enhancing glycolysis is not gene specific, this strategy may be applicable to a wide range of neurodegenerative disorders.

deficiency improves electrophysiological function in both rods and cones. 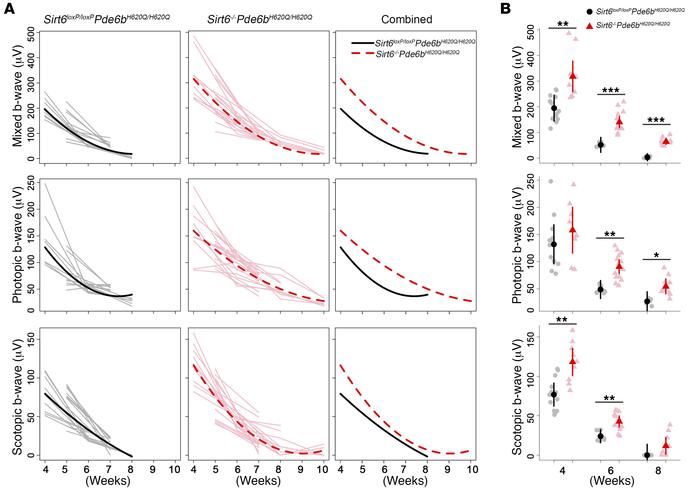