Human NK cell deficiencies are rare yet result in severe and often fatal disease, particularly as a result of viral susceptibility. NK cells develop from hematopoietic stem cells, and few monogenic errors that specifically interrupt NK cell development have been reported. Here we have described biallelic mutations in , which encodes an interferon regulatory factor, as a cause of familial NK cell deficiency that results in fatal and severe viral disease. Compound heterozygous or homozygous mutations in in 3 unrelated families resulted in a paucity of mature CD56dim NK cells and an increase in the frequency of the immature CD56bright NK cells, and this impairment in terminal maturation was also observed in , but not , mice. We then determined that impaired maturation was NK cell intrinsic, and gene expression analysis of human NK cell developmental subsets showed that multiple genes were dysregulated by IRF8 mutation. The phenotype was accompanied by deficient NK cell function and was stable over time. Together, these data indicate that human NK cells require IRF8 for development and functional maturation and that dysregulation of this function results in severe human disease, thereby emphasizing a critical role for NK cells in human antiviral defense.

IRF8 is expressed in all NK cell developmental subsets and is upregulated upon IL-15 stimulation. 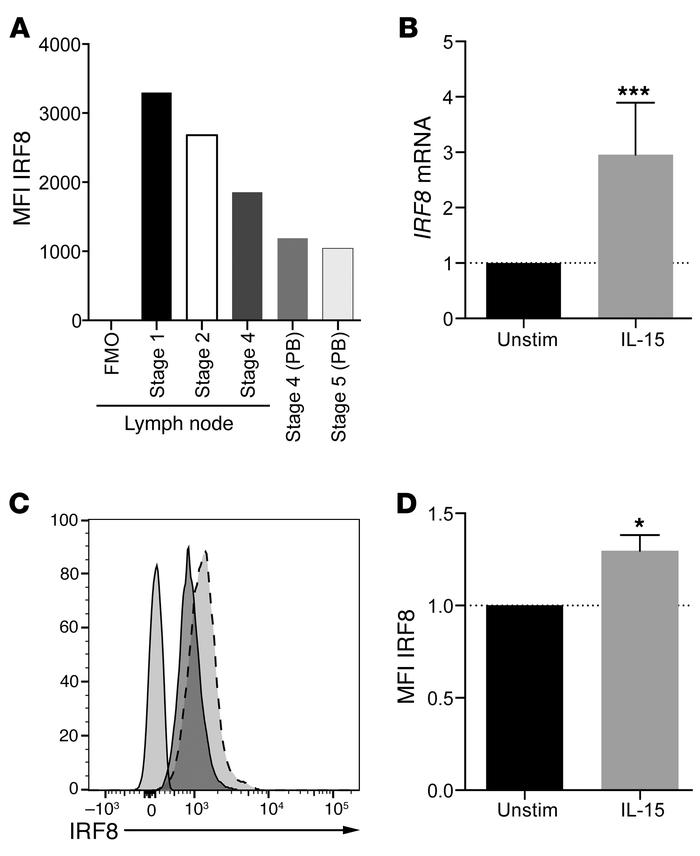 () NK cell developmental subsets were isolated from tonsil as described in Methods, and IRF8 was detected by intracellular flow cytometry. Shown is 1 representative experiment from 3 independent experiments from 3 normal donors. FMO, fluorescence minus one; PB, peripheral blood. () NK cells were incubated for 6 hours with 10 ng/ml of IL-15 or vehicle control, and then RNA was extracted and qPCR performed as described in Methods. *** < 0.001 by Student’s test. Shown are the means of 3 independent experiments performed on 3 donors, each done in quadruplicate. () NK cells were stimulated as in and subjected to flow cytometric analysis as in . Dashed line, IL-15 stimulated; solid line dark histogram, unstimulated; solid line light histogram unstained. () Shown is the mean ± SD of 3 independent experiments. * < 0.05 by unpaired Student’s test. MFI, mean fluorescence intensity.