Inhibition of VLDL secretion reduces plasma levels of atherogenic apolipoprotein B (apoB) lipoproteins but can also cause hepatic steatosis. Approaches targeting apoB synthesis, which lies upstream of VLDL secretion, have potential to effectively reduce dyslipidemia but can also lead to hepatic accumulation of unsecreted triglycerides (TG). Here, we found that treating mice with apoB antisense oligonucleotides (ASOs) for 6 weeks decreased VLDL secretion and plasma cholesterol without causing steatosis. The absence of steatosis was linked to an increase in ER stress in the first 3 weeks of ASO treatment, followed by development of ER autophagy at the end of 6 weeks of treatment. The latter resulted in increased fatty acid (FA) oxidation that was inhibited by both chloroquine and 3-methyl adenine, consistent with trafficking of ER TG through the autophagic pathway before oxidation. These findings support the concept that inhibition of apoB synthesis traps lipids that have been transferred to the ER by microsomal TG transfer protein (MTP), inducing ER stress. ER stress then triggers ER autophagy and subsequent lysosomal lipolysis of TG, followed by mitochondrial oxidation of released FA, leading to prevention of steatosis. The identification of this pathway indicates that inhibition of VLDL secretion remains a viable target for therapies aiming to reduce circulating levels of atherogenic apoB lipoproteins.

Time-course FA oxidation shows a delayed increase in oxidation of labeled FA in the apoB ASO–treated hepatocytes that is inhibited by blocking either lysosomal activity or autophagy. 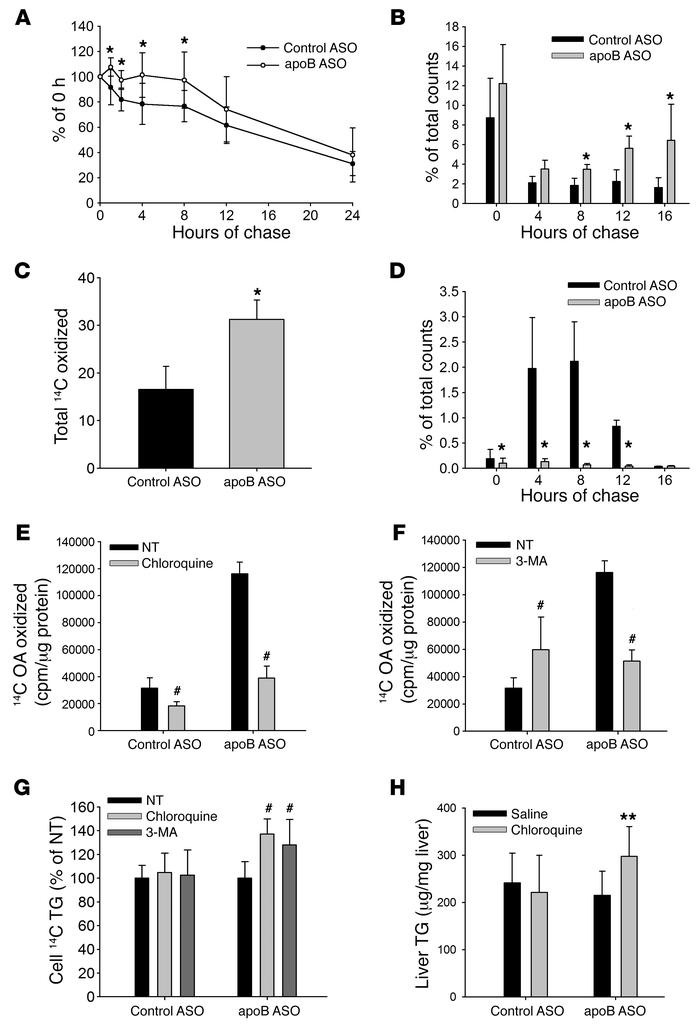 () Primary hepatocytes were labeled with 3H glycerol for 2 hours and chased for either 0, 1, 2, 4, 8, 12, or 24 hours, after which cellular lipid was extracted and 3H TG levels measured. Results are a percentage of total 3H TG at 0 hours. = 9–18 per time point. () Hepatocytes were labeled with 14C OA for 2 hours, and then unlabeled chase media were replenished every 4 hours over a 16-hour period. The amount of 14CO2 and 14C ASM is presented as a percentage of total 14C counts at 0 hours for each 4-hour chase period. = 5 mice per group. () Total amount of 14C OA oxidized over the entire 16-hour incubation period. () Media from parallel plates were collected, and the amount of 14C TG secreted from the hepatocytes is represented as the percentage of total counts in the cell at 0 hours. = 3 wells per group. ( and ) Primary hepatocytes were labeled with 14C OA for 16 hours and then chased for 4 hours in the presence or absence of () 50 μM chloroquine or () 5 mM 3-MA, after which 14CO2 and 14C ASMs were measured. () After the end of the chase, cellular lipid was extracted, and 14C TG was measured and normalized to no treatment. = 6–9 wells from 2 to 3 mice per group. () Mice were injected with ASO for 6 weeks and then injected with either saline or 60 mg/kg chloroquine for 10 days. Liver TG levels were measured and normalized to liver protein levels. = 5–7 per group. All values represent the mean ± SD. (–) * < 0.05, by ANOVA, for apoB ASO–treated versus control ASO–treated hepatocytes. (–) # < 0.05 versus no treatment, by ANOVA. () ** < 0.05, by ANOVA, for apoB ASO plus chloroquine versus apoB ASO plus saline.