Noncoding polymorphisms in the fat mass and obesity-associated () gene represent common alleles that are strongly associated with effects on food intake and adiposity in humans. Previous studies have suggested that the obesity-risk allele rs8050136 in the first intron of alters a regulatory element recognized by the transcription factor CUX1, thereby leading to decreased expression of and retinitis pigmentosa GTPase regulator-interacting protein-1 like (). Here, we evaluated the effects of rs8050136 and another potential CUX1 element in rs1421085 on expression of nearby genes in human induced pluripotent stem cell–derived (iPSC-derived) neurons. There were allele-dosage effects on , , and AKT-interacting protein () expression, but expression of other vicinal genes, including , , and , which have been implicated in mediating functional effects, was not altered. In vivo manipulation of CUX1, , and/or expression in mice affected adiposity in a manner that was consistent with CUX1 influence on adiposity via remote effects on and expression. In support of a mechanism, mice hypomorphic for exhibited hyperphagic obesity, as the result of diminished leptin sensitivity in -expressing neurons. Together, the results of this study indicate that the effects of -associated SNPs on energy homeostasis are due in part to the effects of these genetic variations on hypothalamic , , and possibly other genes.

Phenotypic analysis of mice hypomorphic for and/or . 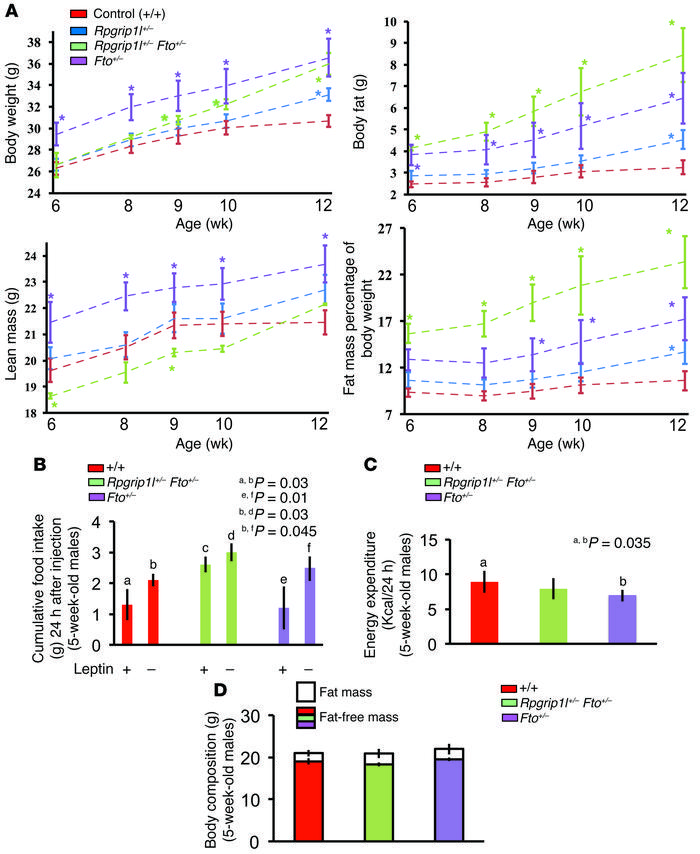