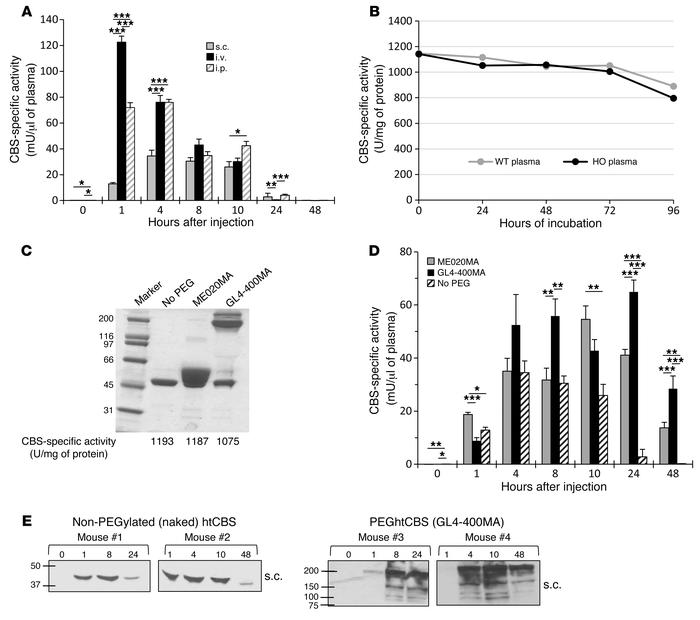 () CBS activity in plasma taken from C57BL/6J mice that were injected with 5 mg/kg BW of htCBS via the i.p., i.v., or s.c. route. Two experimental arms ( = 5 each) were used for each injection route (due to an IACUC restriction on blood volume collected and time between different bleedings of the same mouse; the 1-hour time point was chosen as a shared point between all groups for comparison). Blood was collected after injection from the mice in group 1 at 0, 1, 8, and 24 hours and from the mice in group 2 at 1, 4, 10, and 48 hours. () The htCBS enzyme was incubated in WT or HO plasma at 37°C (160 ng/μl), and activity was measured at the indicated time points. () Coomassie-stained SDS-PAGE of the PEGylated and non-PEGylated htCBS with the corresponding specific activity values. () Mice ( = 4–5) were injected s.c., as described in , with ME020MA- or GL4-400MA-PEGylated htCBS as compared with the non-PEGylated htCBS. () Plasma samples from mice injected s.c. with non-PEGylated htCBS or GL4-400MA PEGylated htCBS were analyzed by Western blotting using an anti-hCBS Ab. Data in and are presented as the mean ± SEM and were compared using ANOVA, followed by Tukey’s post-hoc test. * ≤ 0.05, ** ≤ 0.01, and *** ≤ 0.001. PEG, PEGylated; No PEG, non-PEGylated.