Poorly differentiated thyroid cancer (PDTC) and anaplastic thyroid cancer (ATC) are rare and frequently lethal tumors that so far have not been subjected to comprehensive genetic characterization.

We performed next-generation sequencing of 341 cancer genes from 117 patient-derived PDTCs and ATCs and analyzed the transcriptome of a representative subset of 37 tumors. Results were analyzed in the context of The Cancer Genome Atlas study (TCGA study) of papillary thyroid cancers (PTC).

Compared to PDTCs, ATCs had a greater mutation burden, including a higher frequency of mutations in , promoter, PI3K/AKT/mTOR pathway effectors, SWI/SNF subunits, and histone methyltransferases. and were the predominant drivers and dictated distinct tropism for nodal versus distant metastases in PDTC. and sharply distinguished between PDTCs defined by the Turin (PDTC-Turin) versus MSKCC (PDTC-MSK) criteria, respectively. Mutations of , a component of the translational preinitiation complex, were markedly enriched in PDTCs and ATCs and had a striking pattern of co-occurrence with mutations. While promoter mutations were rare and subclonal in PTCs, they were clonal and highly prevalent in advanced cancers. Application of the TCGA-derived BRAF-RAS score (a measure of MAPK transcriptional output) revealed a preserved relationship with / mutation in PDTCs, whereas ATCs were -like irrespective of driver mutation.

These data support a model of tumorigenesis whereby PDTCs and ATCs arise from well-differentiated tumors through the accumulation of key additional genetic abnormalities, many of which have prognostic and possible therapeutic relevance. The widespread genomic disruptions in ATC compared with PDTC underscore their greater virulence and higher mortality.

mutations and - co-occurrence in thyroid cancers. 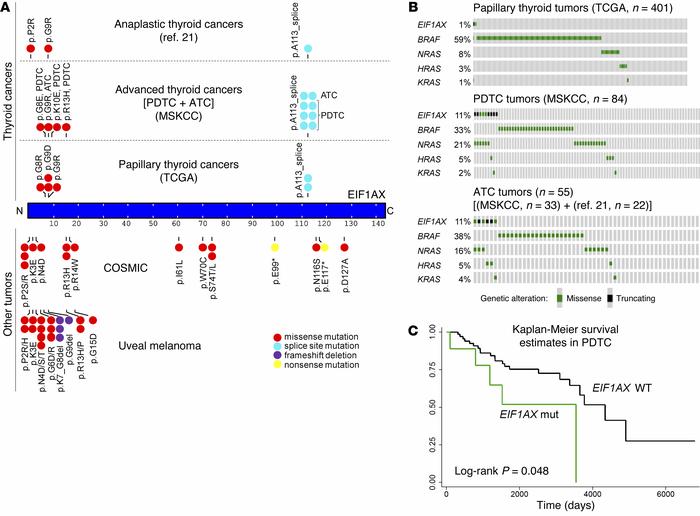 () Distribution of mutations in thyroid cancers and other tumors (modified from ref. ). () Oncoprints showing the co-occurrence of with mutations in PTC from TCGA (top, = 401), PDTCs from our study (middle, = 84), and ATCs from our series and from () (bottom, = 55). () Kaplan-Meier graph showing significantly shorter survival in -mutated PDTCs (log-rank = 0.048). See for detailed clinical correlations.