Neurofibromin 1–mutant (-mutant) cancers are driven by excessive Ras signaling; however, there are currently no effective therapies for these or other Ras-dependent tumors. While combined MEK and mTORC1 suppression causes regression of -deficient malignancies in animal models, the potential toxicity of cotargeting these 2 major signaling pathways in humans may necessitate the identification of more refined, cancer-specific signaling nodes. Here, we have provided evidence that MAPK-interacting kinases (MNKs), which converge on the mTORC1 effector eIF4E, are therapeutic targets in -deficient malignancies. Specifically, we evaluated primary human -deficient peripheral nervous system tumors and found that MNKs are activated in the majority of tumors tested. Genetic and chemical suppression of MNKs in -deficient murine tumor models and human cell lines potently cooperated with MEK inhibitors to kill these cancers through effects on eIF4E. We also demonstrated that MNK kinases are important and direct targets of cabozantinib. Accordingly, coadministration of cabozantinib and MEK inhibitors triggered dramatic regression in an aggressive genetically engineered tumor model. The cytotoxicity of this combination required the suppression of MNK-induced eIF4E phosphorylation and was not recapitulated by suppressing other cabozantinib targets. Collectively, these studies demonstrate that combined MNK and MEK suppression represents a promising therapeutic strategy for these incurable Ras-driven tumors and highlight the utility of developing selective MNK inhibitors for these and possibly other malignancies.

eIF4E is a critical mTORC1 effector in MPNSTs. 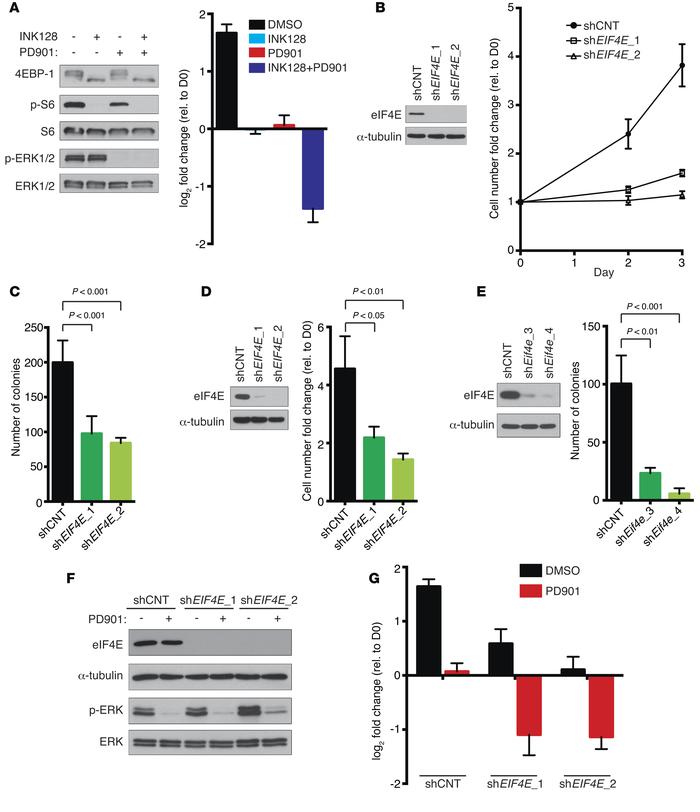