In addition to the infectious consequences of immunodeficiency, patients with Wiskott-Aldrich syndrome (WAS) often suffer from poorly understood exaggerated immune responses that result in autoimmunity and elevated levels of serum IgE. Here, we have shown that WAS patients and mice deficient in WAS protein (WASP) frequently develop IgE-mediated reactions to common food allergens. WASP-deficient animals displayed an adjuvant-free IgE-sensitization to chow antigens that was most pronounced for wheat and soy and occurred under specific pathogen–free as well as germ-free housing conditions. Conditional deletion of Was in FOXP3+ Tregs resulted in more severe Th2-type intestinal inflammation than that observed in mice with global WASP deficiency, indicating that allergic responses to food allergens are dependent upon loss of WASP expression in this immune compartment. While WASP-deficient Tregs efficiently contained Th1- and Th17-type effector differentiation in vivo, they failed to restrain Th2 effector responses that drive allergic intestinal inflammation. Loss of WASP was phenotypically associated with increased GATA3 expression in effector memory FOXP3+ Tregs, but not in naive-like FOXP3+ Tregs, an effect that occurred independently of increased IL-4 signaling. Our results reveal a Treg-specific role for WASP that is required for prevention of Th2 effector cell differentiation and allergic sensitization to dietary antigens.

Increased sensitization and prevalence of food allergy among patients with mutations. 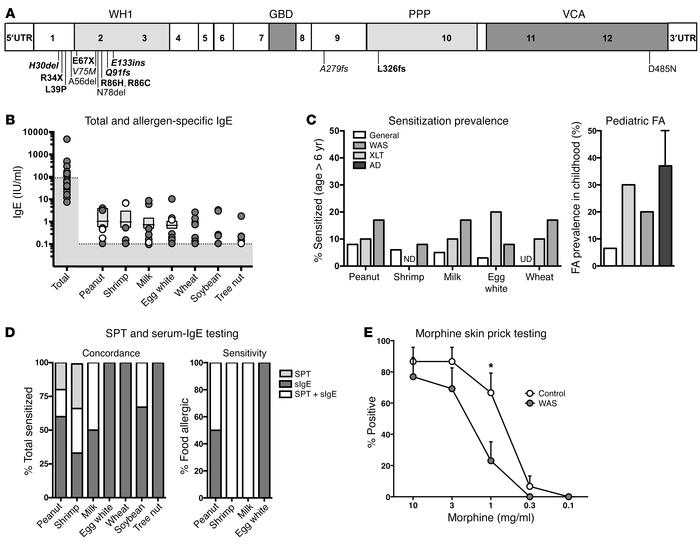