The adoptive transfer of T cells that have been genetically modified to express a CD19-specific chimeric antigen receptor (CAR) is effective for treating human B cell malignancies. However, the persistence of functional CD19 CAR T cells causes sustained depletion of endogenous CD19+ B cells and hypogammaglobulinemia. Thus, there is a need for a mechanism to ablate transferred T cells after tumor eradication is complete to allow recovery of normal B cells. Previously, we developed a truncated version of the epidermal growth factor receptor (EGFRt) that is coexpressed with the CAR on the T cell surface. Here, we show that targeting EGFRt with the IgG1 monoclonal antibody cetuximab eliminates CD19 CAR T cells both early and late after adoptive transfer in mice, resulting in complete and permanent recovery of normal functional B cells, without tumor relapse. EGFRt can be incorporated into many clinical applications to regulate the survival of gene-engineered cells. These results support the concept that EGFRt represents a promising approach to improve safety of cell-based therapies.

Cetuximab-mediated in vivo depletion of m1928E+ T cells allows for B cell recovery in vivo. 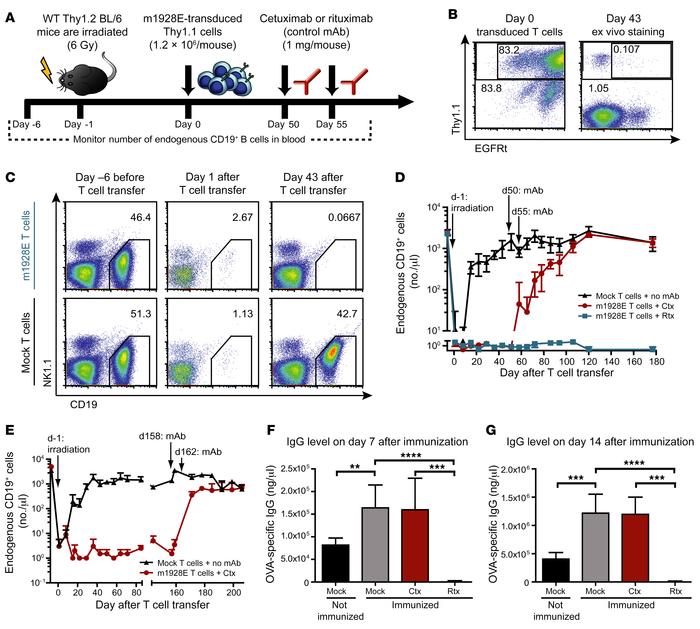 () Experimental layout of depletion experiments based on the transfer of m1928E-transduced cells targeting endogenous CD19+ B cells. () Thy1.1+ mouse splenocytes were retrovirally transduced with the m1928E CAR construct. After transfer of 1.2 × 106 m1928E-transduced (unsorted) T cells, EGFRt+ cells were detected by ex vivo EGFR staining in a blood sample on day 43 after infusion. () Mice were irradiated on day –1 and received m1928E+ T cells or mock T cells on day 0. Numbers of endogenous CD19+ B cells were monitored in the blood before T cell transfer (day –6) and 1 or 43 days after T cell transfer. Endogenous B cells and NK cells were detected in representative samples for each group with anti-CD19 and anti-NK1.1 mAbs, respectively. Gates were set on CD19+ B cells among Thy1.1– living lymphocytes, and numbers indicate B cell frequencies. () Numbers of endogenous CD19+ B cells per microliter blood were acquired for each mouse group over the time course. Time points of irradiation and the 2 mAb infusions are indicated. Means ± SD are shown; = 6 per group. Two-way ANOVA followed by Bonferroni post-test was used for statistics. () In a separate long-term experiment, 8 × 106 m1928E-transduced, unsorted Thy1.1+ cells were transferred into irradiated WT C57BL/6 mice. Cetuximab infusions were performed at late time points (days 158 and 162). Numbers of endogenous CD19+ B cells were obtained over the course of the experiment as described in and . Means ± SD are plotted. = 2 per group. ( and ) After recovery of normal B cell numbers, mice were immunized with OVA protein (100 μg/mouse) mixed 1:1 with Imject alum on day 245 after CAR T cell infusion. One mouse group had received mock T cells and was not immunized as a negative control. OVA-specific IgG levels in the blood plasma were measured by ELISA 7 days () and 14 days () after immunization. Means ± SD are shown for 2 independent experiments; values were calculated by unpaired 2-tailed Student’s test; = 5 for immunized mock, Ctx, and Rtx groups; = 7 for not immunized mock group. ** ≤ 0.01, *** ≤ 0.001, **** ≤ 0.0001.