The adoptive transfer of T cells that have been genetically modified to express a CD19-specific chimeric antigen receptor (CAR) is effective for treating human B cell malignancies. However, the persistence of functional CD19 CAR T cells causes sustained depletion of endogenous CD19+ B cells and hypogammaglobulinemia. Thus, there is a need for a mechanism to ablate transferred T cells after tumor eradication is complete to allow recovery of normal B cells. Previously, we developed a truncated version of the epidermal growth factor receptor (EGFRt) that is coexpressed with the CAR on the T cell surface. Here, we show that targeting EGFRt with the IgG1 monoclonal antibody cetuximab eliminates CD19 CAR T cells both early and late after adoptive transfer in mice, resulting in complete and permanent recovery of normal functional B cells, without tumor relapse. EGFRt can be incorporated into many clinical applications to regulate the survival of gene-engineered cells. These results support the concept that EGFRt represents a promising approach to improve safety of cell-based therapies. 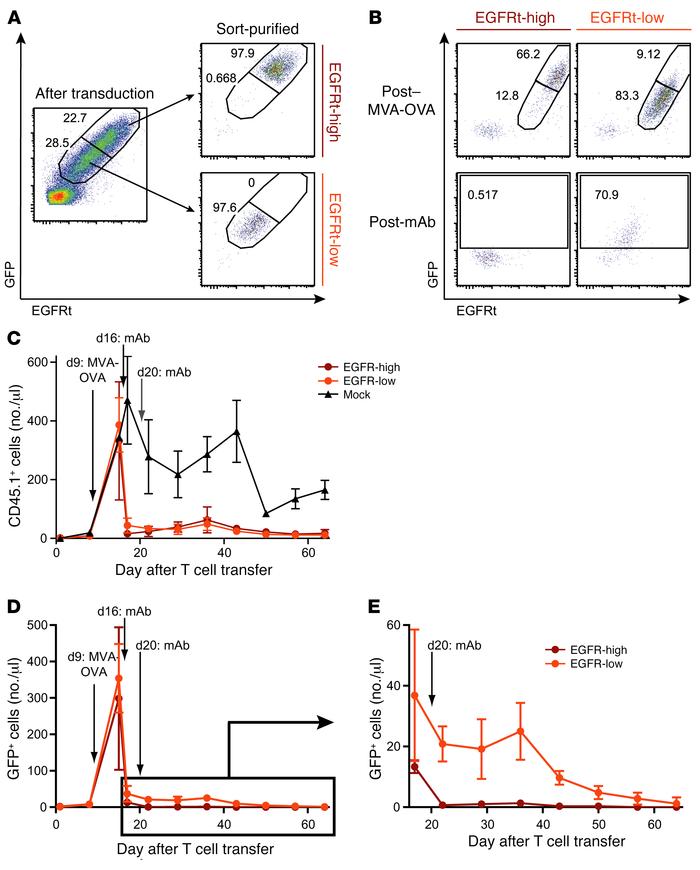 () GFP/EGFRt-transduced CD45.1+ OT-I cells were sorted into GFP/EGFRt-high and -low populations using EGFR Fab Streptamers on day 5 after transduction. Unsorted and FACS-sorted samples were stained with an EGFR-specific mAb. Numbers indicate frequencies of GFP/EGFRt-high (top right gate) and GFP/EGFRt-low (bottom right gate) cells. () 1 × 106 sorted OT-I cells were transferred into separate mouse groups, called EGFRt-high and EGFRt-low, and expanded in vivo by MVA-OVA vaccination. Cetuximab was administered to both mouse groups. Blood samples were obtained after MVA-OVA challenge and after mAb infusions. GFP versus EGFR staining of CD45.1-pregated cells is shown. Frequencies of GFP/EGFRt-high and -low cells are indicated in the top row, frequencies of GFP+ cells in the bottom row. () Blood samples were obtained from 2 mouse groups that received EGFRt-high or -low cells; time points of MVA-OVA challenge and cetuximab infusions are indicated. The control group received mock-transduced OT-I cells and similar infusions. Transferred cells among total living lymphocytes were detected with a CD45.1-specific mAb. Number of CD45.1+ cells per microliter blood was plotted over time for each mouse group. () Numbers of GFP+ cells per microliter blood are plotted over time. () A section of the graph in that refers to days 17–64 is shown on a different axis scale. Means ± SD are shown in all graphs; = 3 for EGFRt-high, = 6 for EGFRt-low, = 2 for mock.