The VI-V fragment of netrin-1 binds and signals through UNC5B. 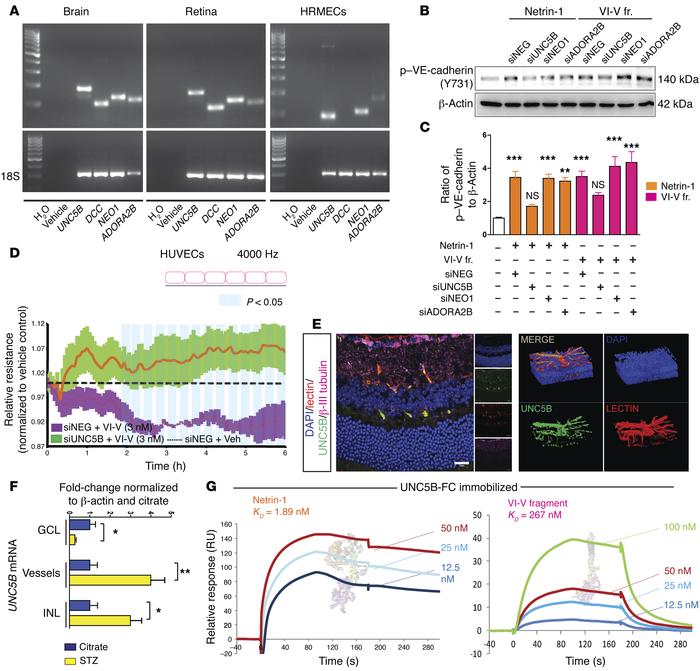 () , , , and expression in endothelial cells ( = 3). () Representative Western blot showing loss of p–VE-cadherin, with silencing of the UNC5B receptor ( = 3). () p–VE-cadherin blot quantification ( = 3). () Paracellular resistance measured in real time by ECIS demonstrated that the VI-V fragment (3 nM) did not compromise endothelial barrier function in endothelial cells transfected with siUNC5B compared with those transfected with siNEG (1.8–6 hours, = 4). () Representative confocal images of isolectin B4– (vessels), β-III tubulin– (retinal ganglion cells [RGCs]), DAPI- (nuclei), and UNC5B-stained retinal cross sections of adult mice revealed that retinal UNC5B was essentially vascular ( = 3). Scale bar: 20 μm. () LCM of the GCL, vessels, and INL, followed by qPCR of ( = 3). () Binding strength of full-length netrin-1 versus that of the VI-V fragment to UNC5B via SPR ( = 4). FC, fragment crystallizable region. Data are expressed as the mean ± SEM. * < 0.05, ** < 0.01, and *** < 0.001, by 1-way ANOVA with Tukey’s post-hoc test () or 2-tailed Student’s test ( and ).