Elevated levels of truncated netrin-1 in the vitreous humor of patients with DME. 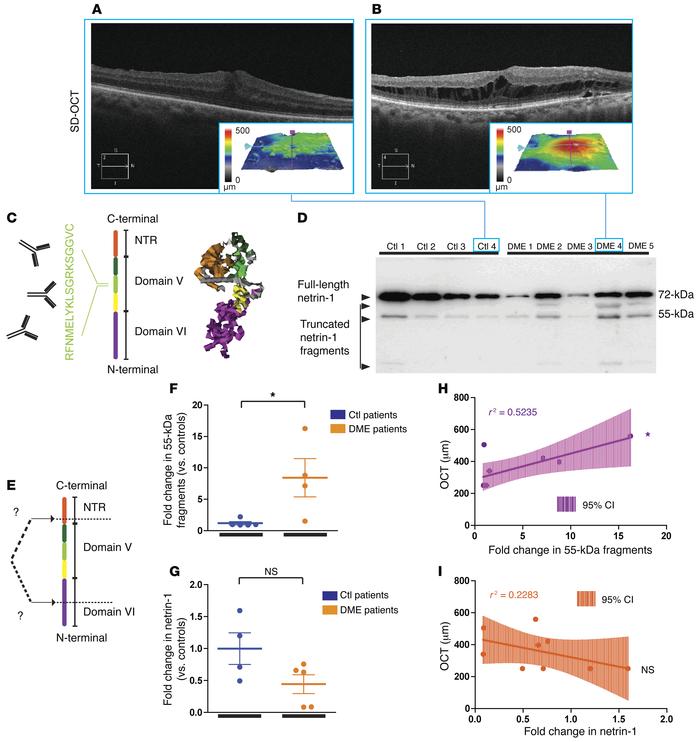 ( and ) 3D retinal maps and SD-OCT of control eye (left) versus eyes of patients with DME (right). The severity of retinal swelling was particularly evident in the central foveal zones. () Netrin-1 Ab targeting a specific peptide sequence in netrin-1 domain V (). () Western blot analysis of equal volumes of vitreous humor revealed the presence of full-length netrin-1 in all samples and of an approximately 55-kDa netrin-1 fragment in a number of patients with DME ( = 4–5). () Schematic diagram of a 55-kDa netrin-1 fragment. () Quantification of signal density revealed an approximately 8-fold increase in the VI-V fragment in vitreous humor ( = 4–5). () Quantification of signal density revealed an approximately 50% decrease in full-length netrin-1 levels ( = 4–5, NS). () Correlation curve between the 55-kDa fragment and OCTs, showing that 52% of the OCT variation was associated with the 55-kDa fragment variation. () Correlation curve revealed no significant correlation between full-length netrin-1 and OCTs. Data are expressed as the mean ± SEM. * < 0.05, by 2-tailed Student’s test. Ctl, control.