Experimentally, females show an improved ability to recover from ischemia-reperfusion injury (IRI) compared with males; however, this sex-dependent response is less established in humans. Here, we developed a series of murine renal ischemia and transplant models to investigate sex-specific effects on recovery after IRI. We found that IRI tolerance is profoundly increased in female mice compared with that observed in male mice and discovered an intermediate phenotype after neutering of either sex. Transplantation of adult kidneys from either sex into a recipient of the opposite sex followed by ischemia at a remote time resulted in ischemia recovery that reflected the sex of the recipient, not the donor, revealing that the host sex determines recovery. Likewise, renal IRI was exacerbated in female estrogen receptor α–KO mice, while female mice receiving supplemental estrogen before ischemia were protected. We examined data from the United Network for Organ Sharing (UNOS) to determine whether there is an association between sex and delayed graft function (DGF) in patients who received deceased donor renal transplants. A multivariable logistic regression analysis determined that there was a greater association with DGF in male recipients than in female recipients. Together, our results demonstrate that sex affects renal IRI tolerance in mice and humans and indicate that estrogen administration has potential as a therapeutic intervention to clinically improve ischemia tolerance. 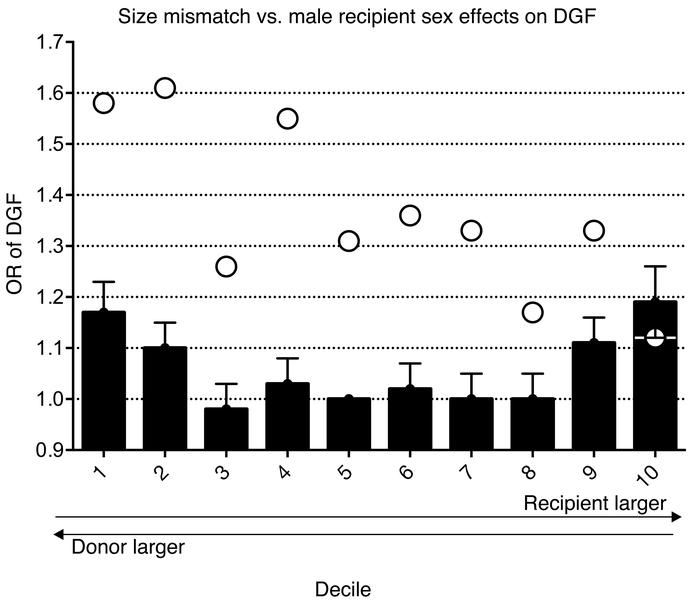 Deceased donor renal transplants ( = 46,691) were stratified into deciles on the basis of donor/recipient BW ratio and analyzed for association with DGF. The extremes of size mismatch on both ends of the curve were associated with increased DGF risk (bars). The magnitude of these effects on DGF was smaller than recipient sex effects in every decile except the smallest donor/recipient ratio (circles).