In humans, genetic variation of sortilin-related receptor, L(DLR class) A repeats containing (), which encodes the intracellular sorting receptor SORLA, is a major genetic risk factor for familial and sporadic forms of Alzheimer’s disease. Recent GWAS analysis has also associated with obesity in humans and in mouse models, suggesting that this receptor may play a role in regulating metabolism. Here, using mouse models with genetic loss or tissue-specific overexpression of SORLA as well as data from obese human subjects, we observed a gene-dosage effect that links SORLA expression to obesity and glucose tolerance. Overexpression of human SORLA in murine adipose tissue blocked hydrolysis of triacylglycerides and caused excessive adiposity. In contrast, gene inactivation in mice accelerated breakdown of triacylglycerides in adipocytes and protected animals from diet-induced obesity. We then identified the underlying molecular mechanism whereby SORLA promotes insulin-induced suppression of lipolysis in adipocytes. Specifically, we determined that SORLA acts as a sorting factor for the insulin receptor (IR) that redirects internalized receptor molecules from endosomes to the plasma membrane, thereby enhancing IR surface expression and strengthening insulin signal reception in target cells. Our findings provide a molecular mechanism for the association of with human obesity and confirm a genetic link between neurodegeneration and metabolism that converges on the receptor SORLA. 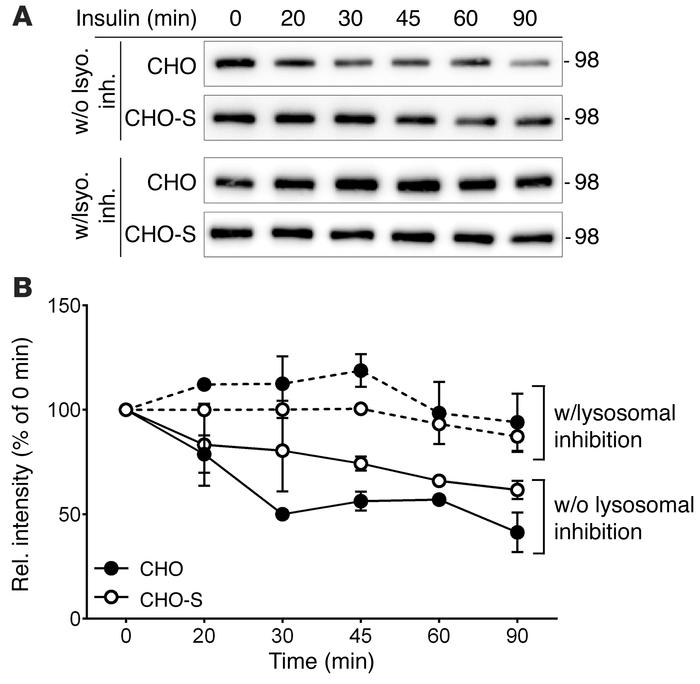 () Cell surface proteins in cultures of CHO and CHO-S cells were biotinylated. Subsequently, 10 μg/ml insulin was added to the cells and the biotinylated proteins precipitated from cell lysates at the indicated time points using streptavidin. The amount of endogenous IR in the precipitate was determined by Western blot analysis. Where indicated, the lysosomal inhibitor (lyso. inh.) cocktail of leupeptin, pepstatin, and chloroquine was absent (w/o) or included (w/) in the cell medium. () Densitometric scanning of replicate blots as exemplified in documents faster turnover of IR molecules originating from the cell surface in CHO as compared with CHO-S cells. No difference in half-life of the IR was observed when the lysosomal activity in the CHO and CHO-S cells was blocked by the lysosomal inhibitors. < 0.05 for genotypes (w/o lysosomal inhibition); not significant for genotypes (with lysosomal inhibition). Unmatched 2-way ANOVA.