(pneumococcus) is the primary cause of bacterial meningitis. Pneumococcal bacteria penetrates the blood-brain barrier (BBB), but the bacterial factors that enable this process are not known. Here, we determined that expression of pneumococcal pilus-1, which includes the pilus adhesin RrgA, promotes bacterial penetration through the BBB in a mouse model. that colonized the respiratory epithelium and grew in the bloodstream were chains of variable lengths; however, the pneumococci that entered the brain were division-competent, spherical, single cocci that expressed adhesive RrgA–containing pili. The cell division protein DivIVA, which is required for an ovoid shape, was localized at the poles and septum of pneumococcal chains of ovoid, nonseparated bacteria, but was absent in spherical, single cocci. In the bloodstream, a small percentage of pneumococci appeared as piliated, RrgA-expressing, DivIVA-negative single cocci, suggesting that only a minority of are poised to cross the BBB. Together, our data indicate that small bacterial cell size, which is signified by the absence of DivIVA, and the presence of an adhesive RrgA-containing pilus-1 mediate pneumococcal passage from the bloodstream through the BBB into the brain to cause lethal meningitis.

In the blood, piliated and RrgA-expressing single cocci, typified by the absence of DivIVA, express more RrgA than do chains and are more prone to penetration of the BBB. 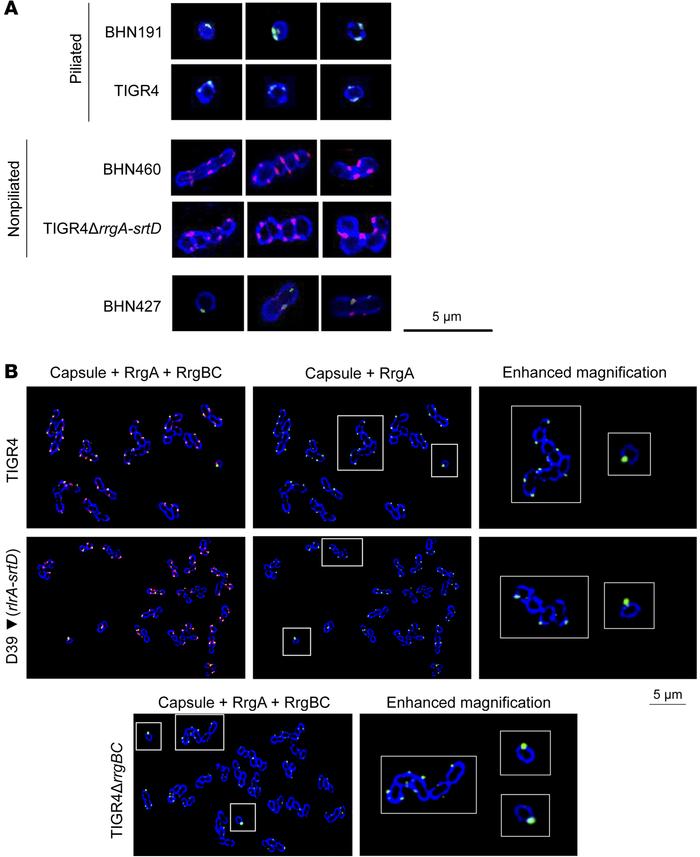