Tuberous sclerosis complex (TSC) is an autosomal dominant tumor-suppressor gene syndrome caused by inactivating mutations in either or , and the TSC protein complex is an essential regulator of mTOR complex 1 (mTORC1). Patients with TSC develop hypomelanotic macules (white spots), but the molecular mechanisms underlying their formation are not fully characterized. Using human primary melanocytes and a highly pigmented melanoma cell line, we demonstrate that reduced expression of either or causes reduced pigmentation through mTORC1 activation, which results in hyperactivation of glycogen synthase kinase 3β (GSK3β), followed by phosphorylation of and loss of β-catenin from the nucleus, thereby reducing expression of microphthalmia-associated transcription factor (), and subsequent reductions in tyrosinase and other genes required for melanogenesis. Genetic suppression or pharmacological inhibition of this signaling cascade at multiple levels restored pigmentation. Importantly, primary melanocytes isolated from hypomelanotic macules from 6 patients with TSC all exhibited reduced TSC2 protein expression, and 1 culture showed biallelic mutation in , one of which was germline and the second acquired in the melanocytes of the hypomelanotic macule. These findings indicate that the TSC/mTORC1/AKT/GSK3β/β-catenin/MITF axis plays a central role in regulating melanogenesis. Interventions that enhance or diminish mTORC1 activity or other nodes in this pathway in melanocytes could potentially modulate pigment production.

Disruption of the TSC protein complex leads to GSK3β activation and reduced β-catenin and MITF transcription in human primary melanocytes. 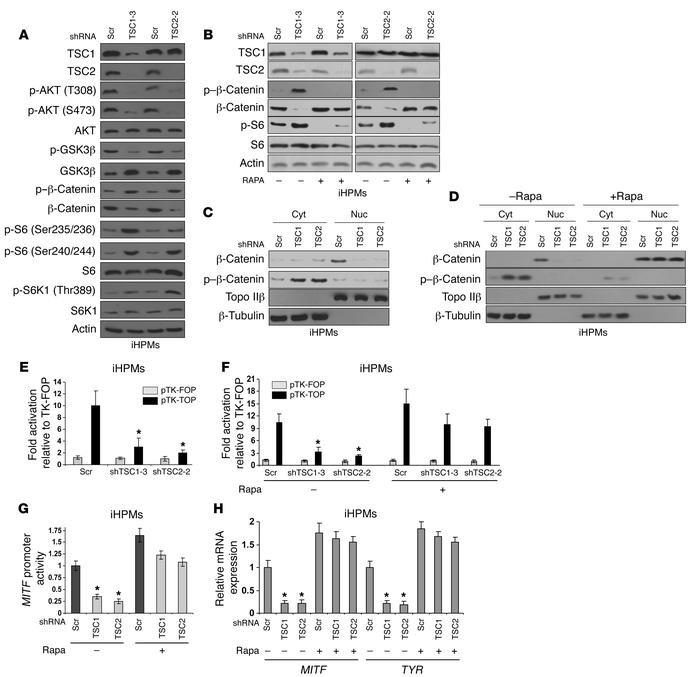