ADP is a key agonist in hemostasis and thrombosis. ADP-induced platelet activation involves the purinergic P2Y1 receptor, which is responsible for shape change through intracellular calcium mobilization. This process also depends on an unidentified P2 receptor (P2cyc) that leads to adenylyl cyclase inhibition and promotes the completion and amplification of the platelet response. P2Y1-null mice were generated to define the role of the P2Y1 receptor and to determine whether the unidentified P2cyc receptor is distinct from P2Y1. These mice are viable with no apparent abnormalities affecting their development, survival, reproduction, or the morphology of their platelets, and the platelet count in these animals is identical to that of wild-type mice. However, platelets from P2Y1-deficient mice are unable to aggregate in response to usual concentrations of ADP and display impaired aggregation to other agonists, while high concentrations of ADP induce platelet aggregation without shape change. In addition, ADP-induced inhibition of adenylyl cyclase still occurs, demonstrating the existence of an ADP receptor distinct from P2Y1. P2Y1-null mice have no spontaneous bleeding tendency but are resistant to thromboembolism induced by intravenous injection of ADP or collagen and adrenaline. Hence, the P2Y1 receptor plays an essential role in thrombotic states and represents a potential target for antithrombotic drugs. 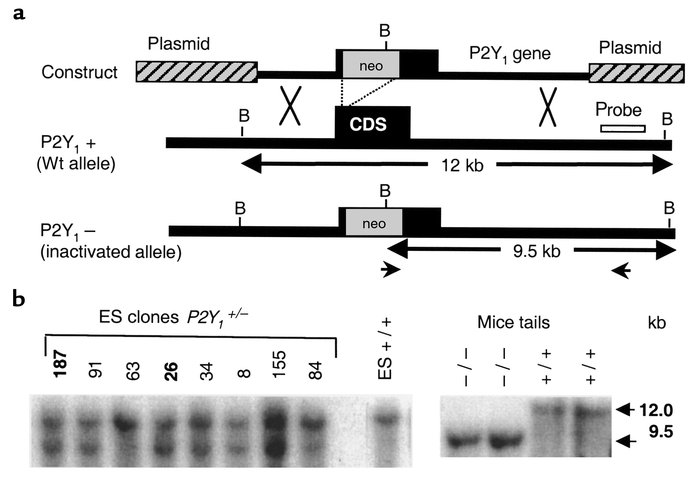 Disruption of the P2Y1 receptor gene in mice. () Gene targeting strategy: structure and partial restriction map of the P2Y1 gene, targeting construct, and targeted allele. The filled box represents the coding sequence. Restriction endonuclease sites: B, HI; arrowheads, PCR primers. () Southern blot analyses of ES clones identified as positive by PCR and of tail DNA from and mice. The 12-kb wild-type and 9.5-kb targeted HI fragments were identified using a probe located outside the 3′ limit of the construct (shown in ). Clones 187 and 26 (bold) were selected to be injected into blastocysts.