Nonalcoholic steatohepatitis (NASH) is the most common liver disease in industrialized countries. NASH is a progressive disease that can lead to cirrhosis, cancer, and death, and there are currently no approved therapies. The development of NASH in animal models requires intact TLR9, but how the TLR9 pathway is activated in NASH is not clear. Our objectives in this study were to identify NASH-associated ligands for TLR9, establish the cellular requirement for TLR9, and evaluate the role of obesity-induced changes in TLR9 pathway activation. We demonstrated that plasma from mice and patients with NASH contains high levels of mitochondrial DNA (mtDNA) and intact mitochondria and has the ability to activate TLR9. Most of the plasma mtDNA was contained in microparticles (MPs) of hepatocyte origin, and removal of these MPs from plasma resulted in a substantial decrease in TLR9 activation capacity. In mice, NASH development in response to a high-fat diet required TLR9 on lysozyme-expressing cells, and a clinically applicable TLR9 antagonist blocked the development of NASH when given prophylactically and therapeutically. These data demonstrate that activation of the TLR9 pathway provides a link between the key metabolic and inflammatory phenotypes in NASH.

Hepatocyte mtDNA in NASH has increased oxidation and is present in plasma MPs. 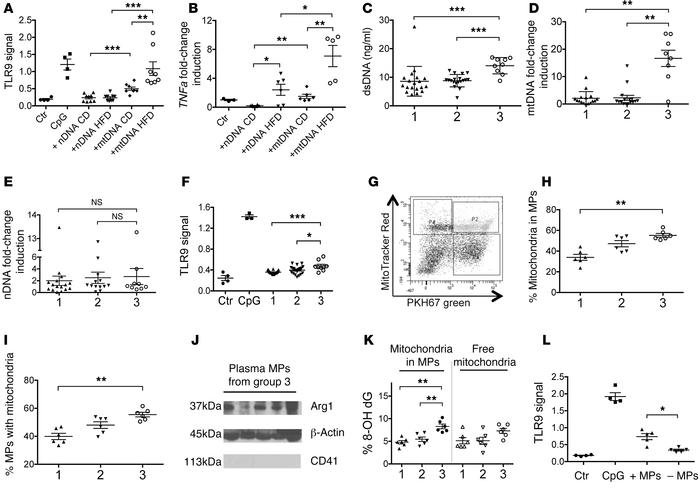 Soluble nDNA and mtDNA from hepatocytes from CD-fed ( = 9) and HFD-fed ( = 9) mice were added to TLR9 HEK reporter cell lines () and murine KCs (CD, = 6; HFD, = 6) () for 12 and 8 hours, respectively, and the upregulation of TLR9 signal and message was quantified. Human plasma: group 1: lean subjects ( = 19); group 2: obese subjects with normal serum ALT levels ( = 19); and group 3: obese subjects with elevated serum ALT levels ( = 9). Group 3 plasma had more total DNA () and mtDNA (), but not nDNA (), and a greater ability to activate a TLR9 reporter cell line (). MPs from group 1 ( = 6), group 2 ( = 6), and group 3 ( = 6) were prepared by high-speed centrifugation of platelet-free plasma after PKH67 plasma membrane staining ( axis) and MitoTracker Deep Red staining (viable mitochondria, axis). Mitochondria within MPs are shown in the top right quadrant (). Gating on mitochondria shows that in group 3, a greater percentage was inside MPs (), and gating on MPs shows that in group 3, there was an increase in the percentage of MPs that contained mitochondria (). Protein was isolated from MPs from group 3 subjects and examined by Abs specific to the hepatocyte plasma membrane protein Arg1 or platelet integrin CD41 ( = 2) (). After gating on MPs (gate size, 0.2–1 mM and PKH67+) and staining for oxDNA, an increase in oxidation status of mtDNA was evident in plasma MPs from group 3 subjects (). MPs were removed from plasma by centrifugation, which resulted in a reduction of the ability of human plasma to activate TLR9 reporter cell lines (). Data represent the mean ± SEM. * < 0.05,** < 0.01, and *** < 0.005, by Mann-Whitney test. Ctr, control.