B cell precursor acute lymphoblastic leukemia (BCP ALL) is the most common malignancy in children. While treatments have improved remarkably over the past four decades, resistant disease and late effects that result from cytotoxic chemotherapy remain serious problems for individuals with BCP ALL. Improved genetic tools have led to the discovery of numerous somatic mutations associated with BCP ALL, leading to a framework for the genetic classification of BCP ALL. In this issue of the , Duque-Afonso et al. develop an accurate in vivo model for BCP ALL that recapitulates the key features of human disease, including acquired mutations in genes encoding PAX5 and components of the JAK/STAT pathway. The authors further show, as proof of principle, that this model can be used to evaluate the efficacy of drugs designed to target specific acquired mutations in patients with BCP ALL.

Collaborative mutations lead to BCP ALL. 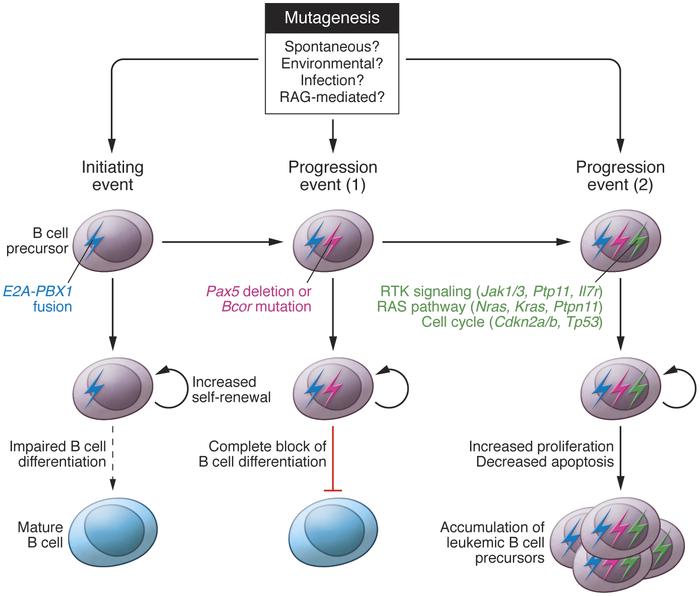 In the context of the E2A-PBX1 model, the initiating lesion (an E2A-PBX1 fusion) is engineered into the mouse germline and results in increased self-renewal and impaired differentiation of B cell precursors. Subsequent mutations — that either occur spontaneously or are engineered into the mouse germline — lead to a complete block to B cell differentiation. Further mutations lead to increased proliferation or decreased apoptosis, resulting in an accumulation of leukemic B cell precursors. These additional mutations involve several overlapping pathways, including those involved in receptor tyrosine kinase (RTK) signaling, RAS signaling, and cell cycle progression. Mutations in several genes, including , , , , , , , and , were identified in the E2A-PBX1 model and were associated with disease progression. It should be noted that this order of mutations, while applicable for E2A-PBX1 mice with engineered mutations, is not necessarily invariant. For instance, an RTK mutation may precede a block to differentiation under certain circumstances. The general framework of this model is based on sequence data from leukemic patients (, ).