The aim of the present study was to develop a chronic in vivo model of pulmonary β2-adrenoceptor desensitization and to elucidate the nature and molecular basis of this state. Subcutaneous infusion of rats with albuterol for 7 days compromised the ability of albuterol, given acutely, to protect against acetylcholine-induced bronchoconstriction. The bronchoprotective effect of prostaglandin E2, but not forskolin, was also impaired, indicating that the desensitization was heterologous and that the primary defect in signaling was upstream of adenylyl cyclase. β2-Adrenoceptor density was reduced in lung membranes harvested from albuterol-treated animals, and this was associated with impaired albuterol-induced cyclic adenosine monophosphate (cAMP) accumulation and activation of cAMP-dependent protein kinase ex vivo. Gsα expression was reduced in the lung and tracheae of albuterol-treated rats, and cholera toxin–induced cAMP accumulation was blunted. Chronic treatment of rats with albuterol also increased cAMP phosphodiesterase activity and G protein–coupled receptor kinase-2, but the extent to which these events contributed to β2-adrenoceptor desensitization was unclear given that forskolin was active in both groups of animals and that desensitization was heterologous. Collectively, these results indicate that albuterol effects heterologous desensitization of pulmonary Gs-coupled receptors in this model, with downregulation of Gsα representing a primary molecular etiology. 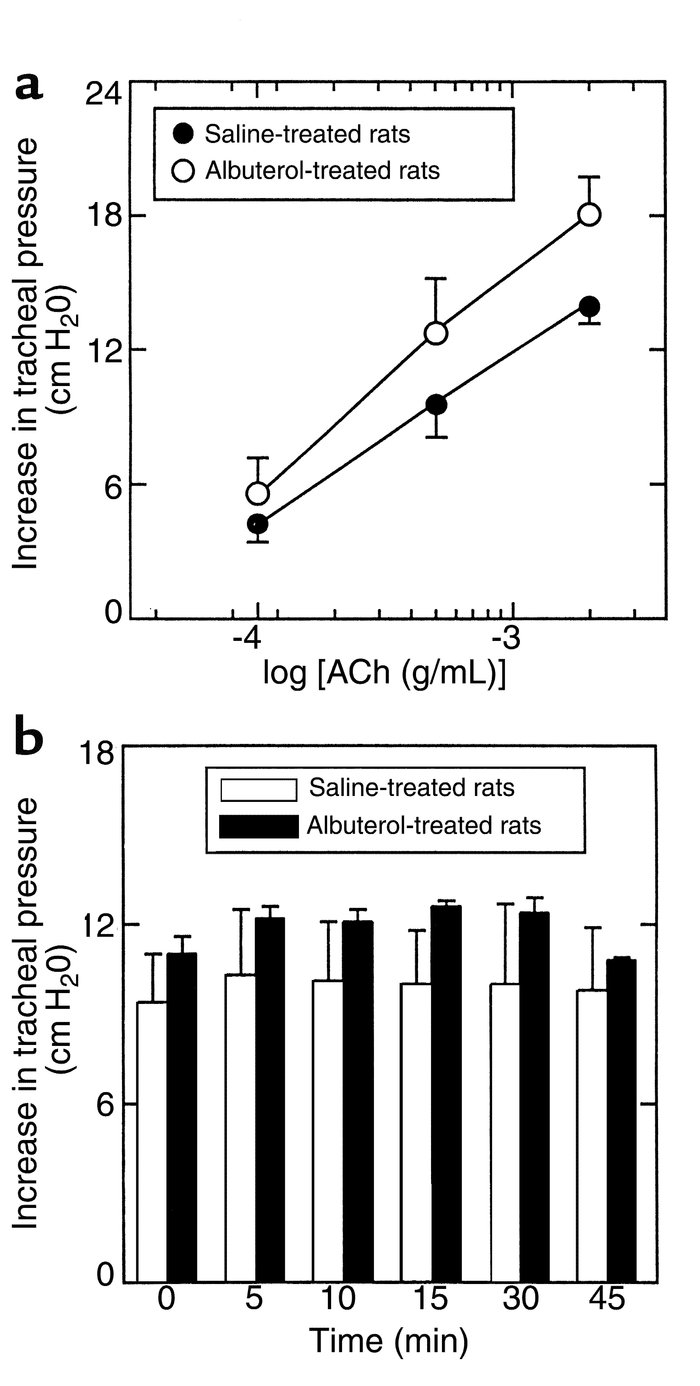 Dose dependence and reproducibility of ACh-induced bronchoconstriction in anesthetized rats treated chronically with albuterol. Rats were implanted subcutaneously with osmotic minipumps delivering saline (filled circles/open bars) or albuterol (open circles/filled bars; 40 μg/kg/h). After 7 days, animals were anesthetized and instrumented for the measurement of lung function. () ACh (100, 500, and 2,000 μg/kg intravenously) was given and the maximum increase in overflow pressure was measured using a modification of the technique of Konzett and Rössler (). Three doses of ACh were administered in a randomized fashion to each animal. () ACh (500 μg/kg intravenously) was given 5, 10, 15, 30, and 45 minutes after the first dose of ACh, and the maximum increase overflow pressure was measured. Data points and bars represent the mean ± SEM of three and four determinations for the dose-dependence and reproducibility study, respectively.