It has been reported that endogenous retroviruses can contaminate human cell lines that have been passaged as xenotransplants in immunocompromised mice. We previously developed and described 2 human pancreatic β cell lines (EndoC-βH1 and EndoC-βH2) that were generated in this way. Here, we have shown that B10 xenotropic virus 1 (), a xenotropic endogenous murine leukemia virus (MuLV), is present in these 2 recently described cell lines. We determined that Bxv1 was also present in SCID mice that were used for in vivo propagation of EndoC-βH1/2 cells, suggesting that contamination occurred during xenotransplantation. EndoC-βH1/2 cells released particles that propagated to human 293T and cells. Mobilization assays demonstrated that transcomplements defective MuLV-based retrovectors. In contrast, common rodent β cell lines, rat INS-1E and RIN-5F cells and mouse MIN6 and βTC3 cells, displayed either no or extremely weak xenotropic helper activity toward MuLV-based retrovectors, although xenotropic retrovirus sequences and transcripts were detected in both mouse cell lines. propagation from EndoC-βH1/2 to 293T cells occurred only under optimized conditions and was overall poorly efficient. Thus, although our data imply that MuLV-based retrovectors should be cautiously used in EndoC-βH1/2 cells, our results indicate that an involuntary propagation of from these cells can be easily avoided with good laboratory practices. 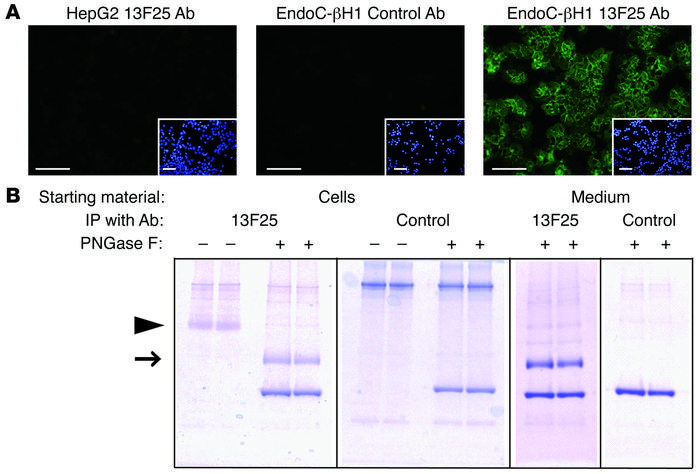 () 13F25 mAb specifically binds to live EndoC-βH1 and not HepG2. Insets show DAPI staining. = 10. Scale bars: 50 μM. () Coomassie gels showing the proteins purified by IP from EndoC-βH1 or conditioned medium using mAb 13F25 or the isotype control Ab. The proteins, indicated with arrowhead at approximately 65 kDa or arrow (after PNGase F treatment) at approximately 50 kDa, were excised for identification by MS ( = 5 and 2 for IP from cells and from medium, respectively). See complete unedited blots in the .